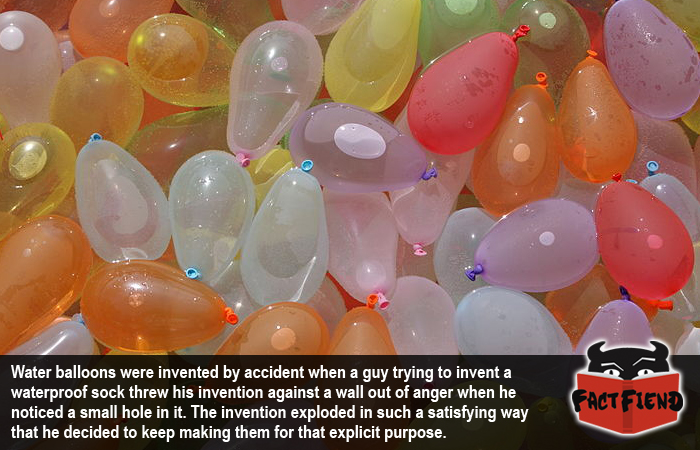 Nailing someone on the melon with a water balloon is one of life’s sweetest feelings, especially when you put the balloon in the freezer for three hours first. So then, it was rather odd to learn that if it wasn’t for a guy being pissed off that he could make a pair of socks, water balloons may never had existed.

To explain, water balloons were invented in 1950 by an English inventor called Edgar Ellington, now when Ellington originally sat down in his lab to get his Farnsworth on, he wasn’t trying to invent a water-based toy for children, he was trying to invent a sock. More specifically, a waterproof sock that could help a person avoid catching a nasty condition colloquially known as “trench foot”, from standing in water for too long.

Ellington’s idea was very simple and it consisted of little more than a latex sock that fit over your regular sock, however, as anyone whose tried wearing a latex product before will attest to, sometimes those buggers can be a pain to get on. Though Ellington was able to create a foot sized latex sock, he couldn’t for the life of him get it to stay on his foot without ripping it (hey, we’ve all been there).

After many, many tries, Ellington eventually managed to tease the latex sock onto his foot, to test that he hadn’t accidentally ripped the sock while putting it on, Ellington then removed it and filled it with water. Why he couldn’t have just stuck his foot into his toilet and noted on a piece of paper if he felt the cold flush of shame is anyone’s guess, but we don’t want to get sidetracked so we’ll leave that for another day.

The story goes that upon filling the sock with water, Ellington noticed a tiny stream of water coming out of the bottom, indicating that his latex sock had somehow sprung a leak. Ellington became so enraged at this point that he hurled the water-filled sock across his lab, which caused it to explode violently and more importantly, awesomely. Ellington was so surprised at this that he re-tooled his invention and decided to sell them to the public as “water grenades” instead of trying to continue making his waterproof sock.

We should probably ignore the fact that by doing this, Ellington was implicitly condemning thousands of people to trench foot, but hey, WATER BALLOONS, YO!