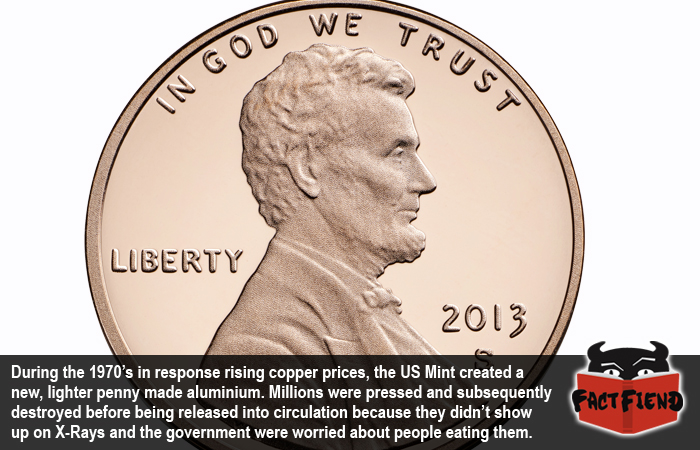 There’s an oft repeated fact that it costs 2 cents to make a single penny, oddly, this is completely true, but we’re not here to talk about that today because we have a much cooler story about the time the U.S. Mint tried to make a cheaper penny, then had to destroy it almost immediately purely because they were worried about people shovelling them into their mouths.

None of that is hyperbole. Back in the 1970’s, with the price of copper sky-rocketing, the government tasked the mint with creating a new, better penny out of a cheaper metal.

Eventually the Philadelphia Mint came up with an idea, making pennies out of plentiful aluminium, which along with being a way cheaper alternative to making them out of copper also rather nicely made the pennies noticeably lighter. Now a penny that’s a few fractions of a gram lighter may not seem like a big deal to us, but for the guys shipping those things by the crate, it would have made a huge difference to their fuel consumption.

It’s not known how much money the pennies would have saved if they were ever introduced, both in terms of raw materials and the fuel they would have saved during transportation, because virtually every single aluminium penny ever made was destroyed when someone realised that they didn’t show up in X-rays.

This meant that if someone was stupid enough to shove a handful of these things down their gullet, it’d be next to impossible for a doctor to detect where in the colon they were hanging out using conventional means. There was also apparently an outcry from vending machine operators who claimed that the pennies damaged their machines, but we think that’s probably bullshit because nobody puts a penny into a vending machine. Nobody wants a can of dick-warm Coke that badly.

But we digress, purely due to pressure from part-time vending machine owners and doctors who didn’t want to spend all day pulling pennies through the urethra’s of morons, all 1.5 million aluminium pennies that had been pressed were ordered destroyed.

So the next time you see someone trying to suggest that 9/11 was an inside job or that the Moon Landings were faked and covered up by the Government. Just remind them that the same Government they seem to think is so powerful, was once kowtowed to the whims of the dickheads who collect change from vending machines.