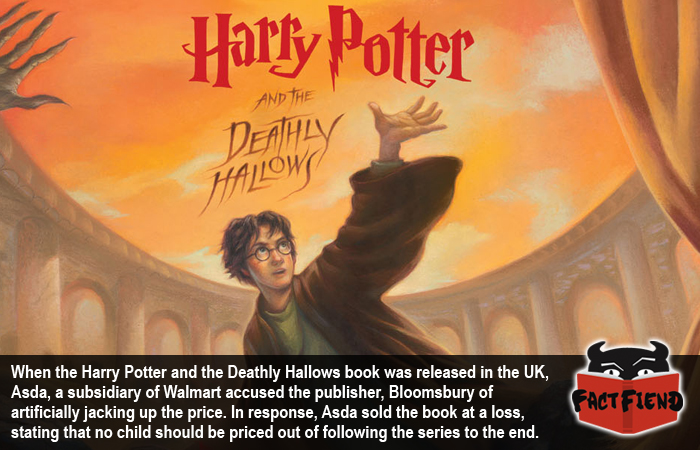 The final book in the Harry Potter series, Harry Potter and the Deathly Hallows was arguably one of the most hotly anticipated book releases in recent history. As such you probably wouldn’t be surpised to read about big companies taking advantage of demand and using the opportunity to gouge the shit out of customers, oddly though one of the biggest companies of them all, Walmart, made a stand and staunchly refused to sell it at a marked up price.

For those of you who aren’t aware, the Harry Potter series is published by Bloomsbury, one of the biggest and best known publishers in the UK. The company came under fire from Asda, a British subsidiary of Walmart when they announced that the recommended retail price of the book was £17.99 (roughly 30 fucking dollars).

Asda saw this pricing as blatent attempt on behalf of Bloomsbury to gouge money from rabid fans who were at that time, willing to pay anything to know how the series ended. Pointing out that the seventh book was literally twice as expensive as the first one and that charging such an amount was effectively “holding children to ransom” before announcing that they’d refuse to charge that much for it, setting their price a full 10 pounds lower than Bloomsbury’s.

Out of nowhere, Bloomsbury suddenly decided that Asda, a literal billion dollar company hadn’t paid for any of the half million copies of Harry Potter and the Deathly Hallows they’d ordered in the UK. A spokesperson for Bloomsbury later told a radio host that their decision to suddenly not send any copies of the book to Asda had nothing to do with the fact they’d been accused of trying to steal money from children and was instead about them not being willing to be in arrears with anyone. Apparently billion dollar companies that rely on good PR are unreliable when it comes to paying for stock that their customers have been waiting years for.

Faced with having no copies at all of the book on release day, Asda quietly apologised to Bloomsbury who stopped being dicks long enough to send Asda the half million copies they’d already paid for. Before Asda had even finished putting the copies on the shelves, they mysteriously announced that they’d be selling the book at the even lower price of 5 pounds. Less than 30% the RRP Bloomsbury themselves insisted upon.

Almost immediately after Asda announced this, other retailers scrambled to lower their prices to keep up, the end result being that virtually no major retailer in the UK charged the price Bloomsbury wanted. Resulting, over all, in the book being sold at a hugely lower price than anyone in the UK expected and in more people being able to afford it.

After the who ordeal, Bloomsbury remained insistent that Asda were merely trying to use their money and power to get a stranglehold on the book market. Which might be the case, but it doesn’t change the fact that a massive retailer went out of its way to sell a book people were foaming at the mouth for at a loss almost purely so children could afford to read it and also to give a huge, book shaped middle finger to a company trying to charge 30 dollars for it.