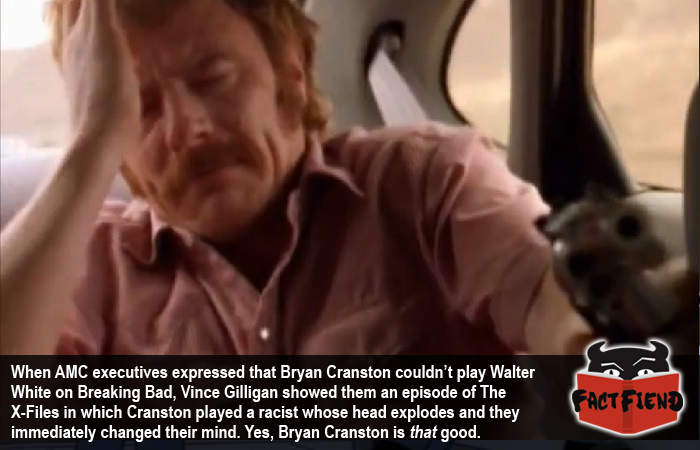 Bryan Cranston is like a chameleon made of honey, in that he can blend into the fabric of any show on television and make it oddly sweeter as a result. Along with having a filmography longer than an ageing gibbon’s pendulous nutsack, Cranston is arguably one of the most versatile actors in Hollywood, something we can prove just by telling you the story of how he got the starring role on Breaking Bad.

To explain, prior to kicking more ass than an abusive donkey farmer as Walter White and way before his role as the affable patriarch of Malcolm in the Middle, Cranston had a small role on an episode of The X-Files called, Drive. In a nutshell, Cranston played an anti-Semitic asshole whose head explodes because the government stuck a giant radio transmitter beneath his house. If that sounds stupid, congratulations on managing to make it this far in life without experiencing what an average episode of The X-Files is like.

Moving on, Cranston was specifically chosen for the role by the episode’s writer, Vince Gilligan, because he felt that Cranston would be able to make the intentionally unlikeable character somehow sympathetic. Which goes to show how much Gilligan believed in Cranston’s acting talent because we honestly can’t think of a character more fundamentally unlikeable than an anti-Semetic shithead who also possesses the ability to detonate their own skull, ruining all furniture and clothing within a 40 foot radius. Despite being asked to play a character with more flaws than a pile of defective Twilight novels and less charisma than the person who would consider buying that pile, Cranston was able to own the role hard enough that even the director stopped and said, “yeah, this guy is pretty good“.

This small, almost embarrassing role would later come back to bolster Cranston’s career when Vince Gilligan was pitching a little show called Breaking Bad to AMC. Originally when Gilligan suggested Cranston for the lead role to the network, the big-wigs at AMC snorted because they simply couldn’t picture Cranston as anything more than a ridiculous manchild.

In an effort to sway the opinion of the executives, Gilligan showed them The X-File’s episode he’d written years earlier to show how Cranston could portray a deeply conflicted, tormented husk of a character capable of eliciting genuine feelings of empathy from an audience while being simultaneously repulsive. Presumably while also pointing out how fucking rad it was that after going through a traumatic character arc that involved learning the error of his ways, his head still exploded. After watching the episode and agreeing that Cranston was as versatile an actor as Gilligan claimed and that exploding heads were indeed “the tits”, AMC signed off on Cranston being cast as Walter White and the rest is history.

So for anyone out there who is currently worried that they may not have the right skills to land their dream job, remember that Bryan Cranston landed the most lucrative, best paying role of his career by playing a racist whose head explodes so you should probably relax a little, you never know what stuff on your résumé will impress someone.

For something a little different, why not read about how there’s apparently only a single recording of Godzilla’s roar in existence.