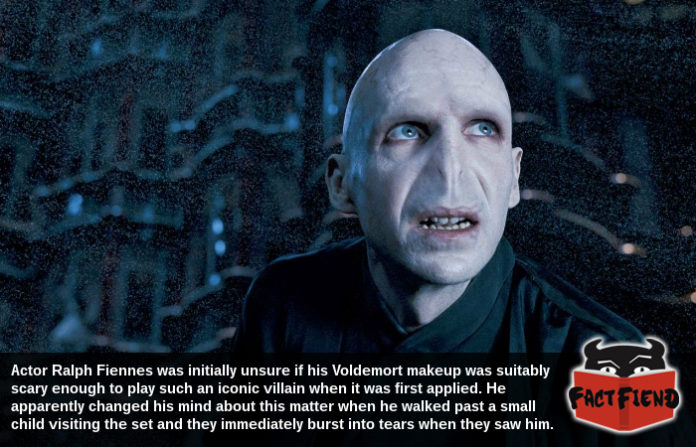 Voldemort is one of the most iconic villains of modern literature and the live-action film adaption of the series took accurately making up actor Ralph Fiennes very seriously to the point they made sure his costume scared the shit out of small children, albeit, unintentionally.

As Fiennes has recounted in numerous interviews over the years since his tenure as wizard Hitler, the process to turn him into Voldemort was a laborious and gruelling endeavour that involved several hours of uncomfortable make-up application as well as someone sticking dots all over his head so they could CGI his nose off in post production.

In addition the wizard robes Fiennes had to wear were incredibly unwieldy and difficult to move around in, a problem that was compounded by the fact he was required to wear a set of silk stockings and a gusset to keep his magic wand from flopping about. According to Fiennes these stockings kept bunching around his knees and ankles almost causing him to almost fall over and eat shit a lot. After this happened one too many times the actor asked costume department to cut them apart and give him a fetching garter to hold them up instead. So yeah, fun fact, throughout the 7th and 8th Harry Potter movie Voldemort was rocking a set of silken fuck-me underwear and loving every second of it, as evidence by this behind the scenes photo.

Ladies underwear aside, the make-up and costume had the desired effect of making Fiennes look suitably terrifying, with Daniel Radcliffe reporting that the first time he saw Fiennes in costume he nearly shit himself, noting that it was a more frightening experience than seeing Alan Rickman in costume for the first time. A pretty bold claim if you ask us but not one we’re going to question because that’s one ghost we’d rather not piss off.

On an appearance on the Graham Norton show, Fiennes admitted that he personally wasn’t sold on the impact the costume had on others until he walked past a script supervisor’s 5 year old son and caused them to burst into tears by sneering at them like dog turd that had just landed on his breakfast. This of course prompted him to fistpump like a jackass in full Voldemort costume because it’s not like he could have comforted the poor kid dressed like a melting wax figure of a frozen child molester. 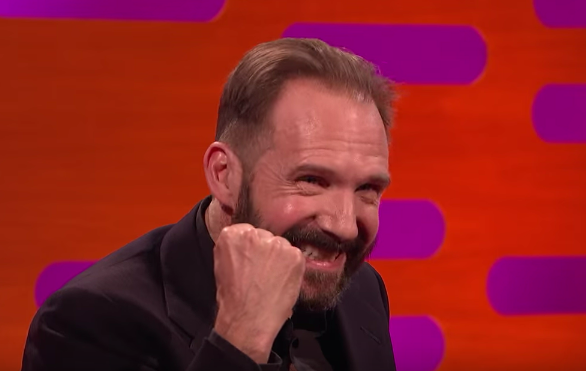