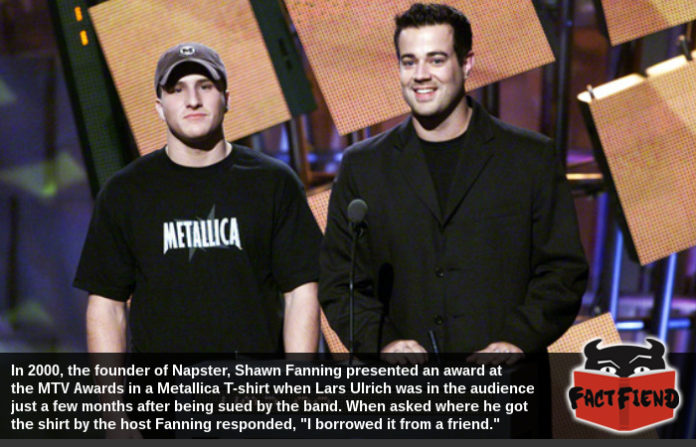 In the year 2000 Shawn Fanning, the founder of a site that let people download music for free, found himself on the end of the legal shotgun of a small band called Metallica. Rather than back down, Fanning decided to annoy the shit out of the band by making fun of them on national TV.

First some background, in 2000 Metallica found out that a song they’d recorded for the Mission: Impossible 2 soundtrack had leaked and was being played on radio stations across America. Realising that they weren’t getting any money for this, the band hired a guy to find out where it had been leaked from, which led them to Napster. One of the earliest and most influential file sharing websites. Metallica were pretty fucking pissed – especially when they discovered that their entire discography was also available to be freely downloaded on the website – and immediately filed a lawsuit for copyright infringement.

Considering the time and era we live in today, this probably sounds pretty futile what with the proliferation of torrent sites and whatnot, but the year 2000 was a different, very strange time. So strange in fact that a lot of musicians weren’t even aware of the existence of MP3s, Metallica especially were annoyed that fans were able to get their albums without paying and decided the best course of action was to sue the shit out of Napster. This set a precedent that allowed other struggling artists feeling the sting of those lost album sales like Dr Dre to similarly sue the site for damages.

The end result of the suit was millions being paid out to Metallica to the tune of $100,000 per song hosted on the site, hundreds of thousands of Metallica fans being banned from using Napster and universities across the country (who Metallica also sued) blocking access to the site for students. Enter the 19 year old founder of Napster, Shawn Fanning and his massive swaggering dong and a chance appearance at the VMAs.

As you can probably guess, Fanning wasn’t all that pleased about Metallica suing Napster and targeting fans of their music and decided to use an appearance he was set to make at the 2000 MTV video music awards to deliver a suitably overt fuck you to the band. Knowing Metallica’s drummer and the most vocal critic of file sharing, Lars Ulrich was going to be there, Fanning arranged to walk on stage wearing a borrowed Metallica t-shirt as one of their songs played in the background. After being introduced as the founder of Napster to a ear-splitting cheers, Fanning walked to the and introduced himself. As he got to the podium, Fanning’s co-host noticed the logo on his chest, to which he simply says, “nice shirt” as the pair both lose their shit.

After regaining his composure Fanning calmly responded “A friend of mine shared it with me, but I’m thinking of getting my own”. It’s at this point the co-host realised this wasn’t part of a bit and tries to hurry the show along, telling Fanning they’re running short of time despite him only being on stage for 4 seconds. Fanning, visibly annoyed and uncomfortable, tells the co-host he really doesn’t want to be there and says nothing for the rest of the introduction. As this was happening, a cameraman apparently realised who the fuck Fanning was and tried to capture Ulrich’s reaction to seeing him on stage who, upon realising he’s being filmed, literally pretends to be asleep.

Ulrich then spent the rest of the show trying to slowly melt into the furniture before being called on stage to introduce Blink 182. Unlike Fanning who was cheered as he walked on stage, Ulrich was booed the entire time.