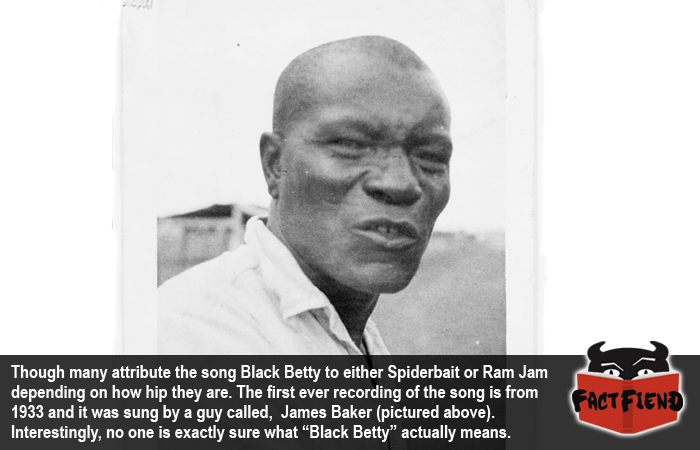 Amazingly despite the song, Black Betty being covered hundreds of times in the 70 or so years it has existed and it being the subject of academic study and debate, for almost as long, no one, anywhere has ever conclusively proven what the eponymous Black Betty actually is. As far as we know it could either be a gun, or a bottle of hooch.

As mentioned in the image above, the earliest recording of the song is attributed to a man called James “Iron Head” Baker who recorded the song in 1933 while he was a prisoner in Texas. We should point out that Iron Head didn’t write the song, he’s just the earliest known person to be recorded singing it. However, because the song is classified as a “work song”, in other words something that was sung by slaves or prisoners, its origins could stretch back as far as the Civil war.

It’s for this reason that determining who or what “Black Betty” actually is has proven to be next to impossible for musicologists. Though the lyrics would suggest that Black Betty is a human being, considering they note that “Black Betty had a child“, music lyrics are very rarely interpreted literally.

For example, one theory is that Black Betty actually refers to an old style musket (that usually came with a black painted stock), and that the song was originally a marching tune meant to be sung by soldiers to help them step and march in time with one another. The theory is that the words, “bam-ba-lam” refer to the sound of the gun firing.

Another, just as plausible theory is that Black Betty is a bottle of whisky, which would explain lyrics like “She really gets me high” and “Boy, she makes me sing” because as anyone who has drunk whisky before will tell you, drinking enough of it really will make you want to sing out loud. Again, no one is really sure.

Another, more sinister explanation for who Black Betty is comes from the mouth of Iron Head himself, according to an interview with the singer, Black Betty was the whip the guards used to use to punish the inmates. On a brighter note, if this theory is true, the song was supposedly written to make fun of the whip, which is easily one of the most badass things we’ve learned all week.

It’s entirely likely that we will never know who or what Black Betty was, because the song comes from a time when records were more poorly kept than pre-owned wigs. Which if we’re honest only makes the song cooler, Black Betty can mean whatever you want it to, but we’re going to go with the whip option because we can’t not agree with a guy called Iron Head.