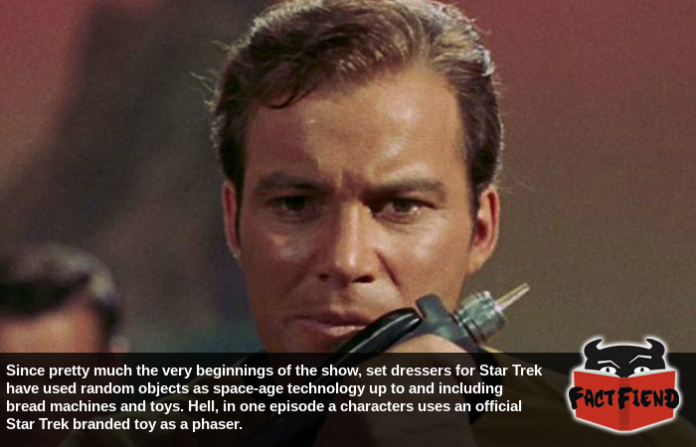 Star Trek is a franchise which showcases humanity in its best possible light, predicting a future in which the human race has prospered and all material wants and needs have been solved by technology. Technology that, as fantastical as it may have appeared on screen, was realised via altogether more straightforward means behind the scenes.

Before that though it’s probably worth noting that Star Trek has had an observable impact on the progression of real-world science and technology with many, many eminent eggheads in the spheres of bleeding edge science and technology citing Star Trek as both an inspiration and a guide for what they want to achieve in their respective fields. For example, the American Association for Artificial Intelligence has officially gone on record as saying that the ultimate end goal for AI as a concept for their group is to one day create Data.

Likewise, the series has been credited for inspiring everyone from early cell phone manufacturers to people working in the field of VR. Which kinda makes sense when you consider all of the cool future shit they use on that show that is commonplace today, like impossibly flat personal computing devices containing the totality of human knowledge up to that point. AKA, the thing you’re probably reading this article on that 25 years ago, was the kind of thing you’d see the captain of a starship using. 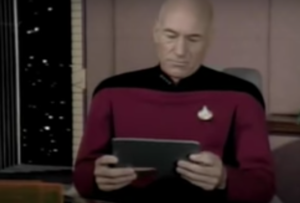 Anyway, whilst a lot of the technology on Star Trek looks future as fuck, it was largely realised in a far more low-fi fashion. For example, that ipad looking device was simply a housing with some lights in it onto which a sheet of plastic with futuristic jargon on it would be placed, giving the illusion that the device was functional and capable of showing information when in reality it was about as functional as a student on a weekend.

Go back to the original series though and the solution for realising this technology was even more basic, with the early “electronic clipboards” seen on Star Trek: The Original Series being a literal toy the production picked up for about 30 cents. For the curious, the toy was a Magic Slate, you know, those things you used to draw dicks all over when you saw them in Toys R’ Us.

Seemingly because the universe has a sense of humor, the company that made that toy ended up licensing the Star Trek brand meaning, for a brief period, it was possible to buy a Star Trek branded toy supposed to feature a childish facsimile of a special effect featured on the show that produced an effect of the exact same quality.

Moving on, other props on the show that were just random shit the set dressers decided looked futuristic include a toy robot being used as a Ferengi weapon, a composter doing double duty as housing for dangerous space-freight and a bread maker being repurposed as a “stasis machine”. 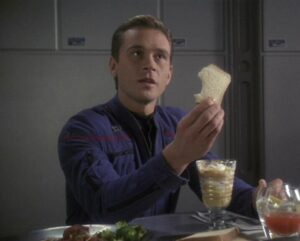 Perhaps the best example of this, shall we say, creative solution to set dressing occurred in Star Trek: Enterprise when the crew used replica phasers made by Diamond Select Toys as background props and in one case, a hero prop the main character used to threaten to blow an alien’s head off.

This puts that specific phaser replica in a weird state of limbo where it is considered to be both a replica and a screen-used prop. Which is kind of amazing to think about.