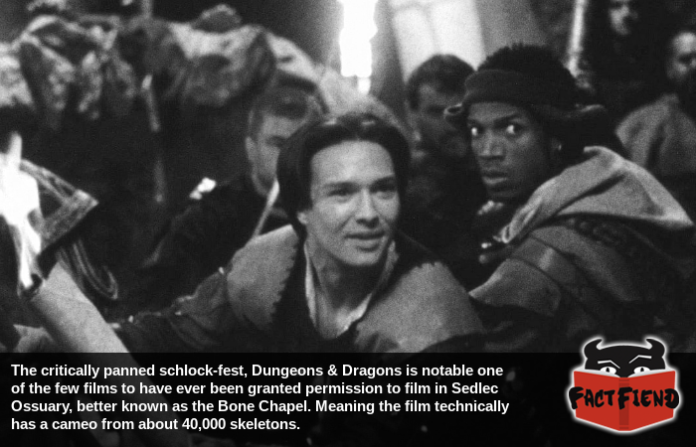 Dungeons & Dragons is critically maligned cinematic turd that was dropped onto the heads of the unsuspecting public in the early 2000’s largely considered one of the worst movies of that year, if not the entire decade. Which is weird considering it one of the only films in history to have been granted permission to film in the famed Sedlec Ossuary, giving the film the dubious honour of featuring a cameo from about 40,000 skeletons.

For anyone unfamiliar with the Sedlec Ossuary, it is perhaps better known as the Bone Chapel – which makes sense because that sounds metal as fuck – and it is famous for being the church that looks like it caters exclusively to Predators.

Decorated with the actual skeletal remains of between 40 and 70 thousand people killed by the plague, the church, contrary to it’s foreboding appearance, is considered by many Czech people and the church itself as a place peace and positivity. Because nothing says you’re in for a good time like thousands of skulls. 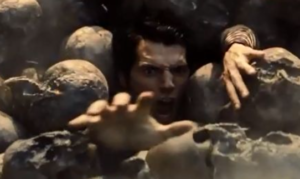 While this may sound odd, the justification for this line of reasoning is quite sound, mainly that because the bones are of people at rest in a holy place who were interred there during a time of great sorrow, they represent spirits at peace. For this reason the Czech government largely turns down any requests to film in the church so as to not disturb the spirits. Which makes it all the more baffling that the crew of Dungeons & Dragons were allowed to film there.

You see, somewhat understandably, the church is frequently approached by heavy metal bands wanting to film within its boney walls. All of which are turned down because the church doesn’t wish to allow that kind of energy to upset the skeletons. Which is their prerogative but makes it kind of baffling that they then allowed parts of Dungeons & Dragons to be filmed there. Partly because a lot of heavy metal is directly inspired by the series but mostly because the film used the church as Lord Profion’s lair. A character we don’t even need to tell you is evil because he has a lair.

What makes this decision all the more mystifying is that the director of the film, Courtney Solomon, was keenly aware that the church didn’t like such associations and has spoken at length about how the church is place of great reverence only to refer to it as “Jeremy’s Office” in the next breath. In fact, according to him the location was scouted explicitly to serve as the evil lair of a dickhead wizard, which makes us think the church didn’t know what Dungeons & Dragons was or just really wanted to meet Jeremy Irons. Either way, the film now has the distinction of being the first major Hollywood movie to be given permission to film inside the church and they made Dungeons & fucking Dragons.