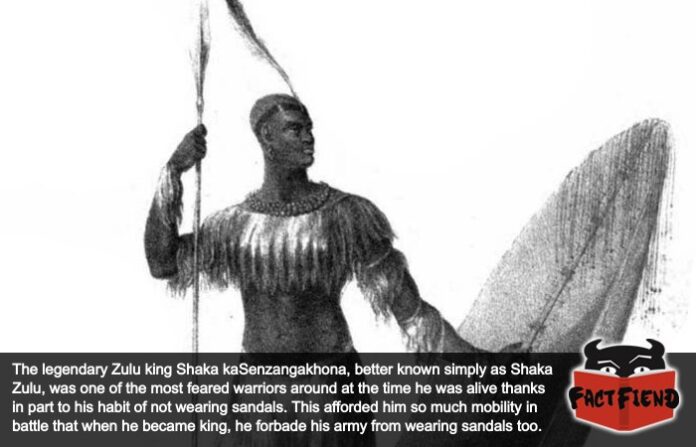 Shaka kaSenzangakhona, better known as Shaka Zulu or simply King Shaka, is a legendary if somewhat infamous figure in African history whose ferocity and ingenuity in combat helped him conquer a significant portion of Africa with an initial force of just 1,500 men. A group of men the Zulu King honed to a deadly edge by, amongst other things, taking their sandals.

First though it’s important to understand that before the arrival of Shaka, African tribal combat and especially the battle style of the Zulu tribe Shaka would eventually become synonymous with was markedly different. Specifically, combat largely focused on defensive skirmishes that revolved almost entirely around the assegai, a light spear that warriors would hurl at their opponent as combat began. Shaka was not a fan of this technique as most of the time the thrown spear would be dodged or blocked, only to be thrown back. So, rather than throw his spear, Shaka would charge towards his enemies and stab them to death, a revolutionary technique that made him one of the most feared and respected warriors in his tribe.

As an aside, it’s worth noting that Shaka ended up ruling the Zulu people as a direct result of his prowess and skill in combat as he had no real claim to the Zulu throne as he was an illegitimate child of the Zulu king at the time. In fact, according to legend, Shaka’s own name literally translated to “parasite” after his father insisted that his mother couldn’t be pregnant and was instead suffering from intestinal distress caused by the iShaka beetle. It was only when Shaka was born that the king reluctantly allowed him to join his tribe, at which point Shaka set about proving he was a fucking badass of the highest order.

For example, in addition to charging his opponent to engage in hand-to-hand combat Shaka spent a considerable amount of time hardening his body to the elements and stress of combat, specifically his feet. You see, at the time Zulu warriors wore cowhide sandals in combat, which Shaka found uncomfortable and discarded. This small change made Shaka a force to be reckoned with in battle, allowing him to deftly slip thrown spears and close the distance with the enemy in moments. At which point he’d employ his trademark stabbing people the fuck to death technique. 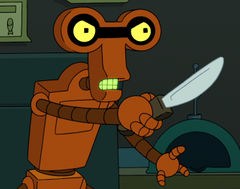 This tactic ended up being so useful that when Shaka assumed the throne he immediately trained his army to do it too. Discarding the traditional assegai and instead teaching his men to fight with a smaller spear more suitable for stabbing called an aniklwa. A weapon we feel compelled to mention was named that, reportedly, because that was the exact sound men made when they were stabbed by it. Which is metal as fuck.

By far one of the more bizarre changes Shaka insisted upon though was that all his men stopped wearing sandals, something he was so serious about that he made wearing them in battle an offence punishable by death. In addition, Shaka had his men march upwards of 50 miles per day over the roughest terrain he could find to harden the soles of their feet. Sometimes intentionally making men march over thorns and jagged rocks. All of which combined to make his soldiers both incredibly mobile and exceptionally deadly in combat and helped him conquer a significant portion of Africa through the brutal and rapid subjugation of rival tribes.

A fact that made King Shaka a somewhat reviled figure towards the end of his reign and no doubt contributed to him being assassinated by one of his half-brothers, fittingly by being stabbed at close range with a spear, and buried in an unmarked grave. Something he probably should have expected given that he basically invented that, but hey, you live and learn.