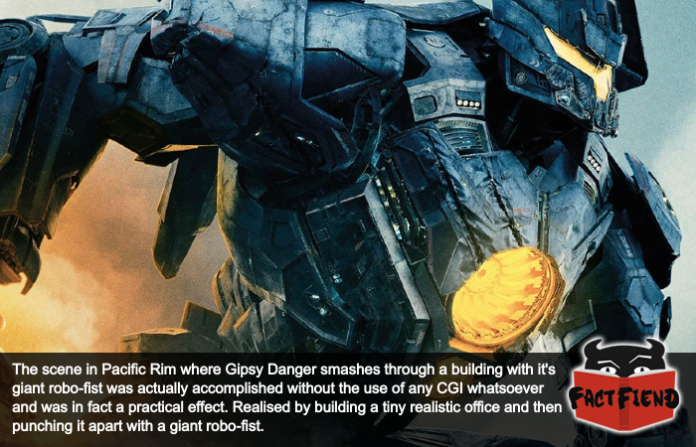 Pacific Rim is a film in which Idris Elba commands giant robots to perform rocket-assisted boat combos on alien bio-weapons. Scenes which were, for the most part, largely realised with CGI because the film didn’t have the budget to build an actual giant robot. That said, they did have the money to build a giant fist, which they used to destroy a tiny building. Because of course.

First things first we feel compelled to mention that it is the opinion of experts on robotics and other cool shit like that, that the jaegers seen in Pacific Rim are theoretically feasible, if wildly inefficient from a design standpoint. In fact, the most unrealistic element of the film according to experts isn’t the idea of giant robots, but the idea of helicopters being able to move them, with one source calculating that you’d need at least 64,000 helicopters just to move one jaeger.

Anyway, as the film was directed by known turbo-nerd Guillermo del Toro, a heroic amount of effort was made to ensure that the film was as realistic as possible in regards to its portrayal of the big-ass robots as well as establishing a world that made sense of them to exist in. For example, Del Toro was insistent that the all jaegers looked realistically battle-worn and was made of parts that could realistically be manufactured here in our world as well sporting details representative of the attitudes of where it was built. One of our favourites being Cherno Alpha which, whilst not directly mentioned in the film, sports no escape mechanism of any kind, because it’s pilots are expected to fell opposing kaiju or die trying. You know, because Russia.

This dedication to realism led to the film using a surprising amount of practical effects for a movie sold on its visual effects, like the conn-pod, which was an actual, room-sized prop that actually flipped people upside down like a kid playing with an action figure. 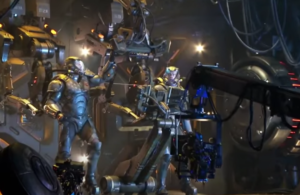 By far the most impressive practical effect though is one most people likely didn’t notice, specifically in the middle of one of the Hong Kong battle, you know the one where a robot uses a boat as a fucking sword, Gipsy Danger right-hooks a building, obliterating an entire office save for one desk. With a Newton’s cradle on it. 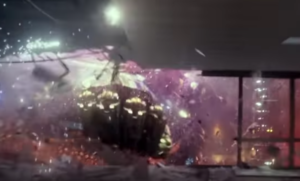 As it turns out, that one shot was accomplished entirely with (tiny) practical effects, specifically by constructing a pint-sized office set that they then smashed apart with a big robotic fist. As an idea of how much effort went into this one scene, the guys tasked with realising it, 32Ten Studios, went as far as making tiny office supplies and even knickknacks for each desk. 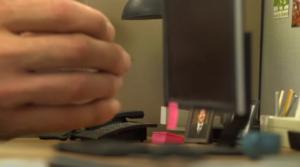 Keep in mind that each of these things appeared on screen for less than a fraction of a second before they were all, and we can’t stress this enough, smashed to pieces by a giant robotic fist. Something they didn’t need to do but we’re very happy they did, if only because it gave us an excuse to talk about Pacific Rim.