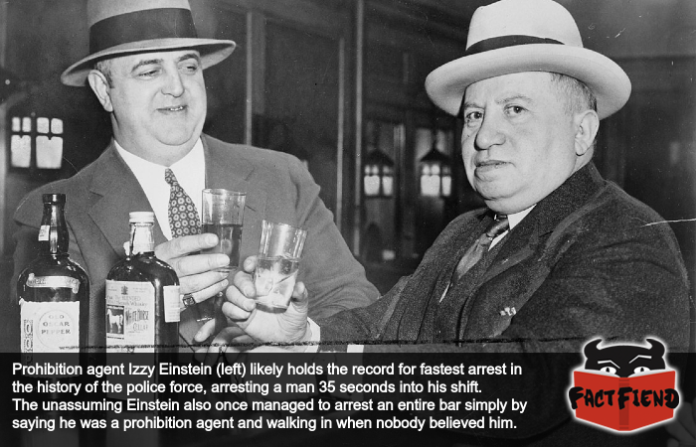 Prohibition was a strange period in American history where countless people were arrested for simply wanting to get blind piss drunk. Arrests that were made by a veritable army of prohibition officers trained to sniff out drunkards, speakeasies and illicit hooch, the most successful of which was a 5 and half foot tall, 200 pound unathletic sack of shit called Izzy Einstein. A man so talented at finding illegal booze he once made an arrest 30 seconds into a shift.

A small, portly man with no law enforcement experience whatsoever, Einstein was almost laughed out the initial job interview to become a prohibition agent until he pointed out to the interviewer that the fact he looked nothing like a police officer was precisely why he’d be so good at sneaking into speakeasies and shit. Something the interviewer was hesitant to believe and decided to test by sending Einstein to a nearby speakeasy with an infamously eagle-eyed doorman said to be able to spot an undercover prohibition agent with Terminator-like precision.

To prove his point Einstein walked into the bar in full uniform and asked the bartender for a pint of whiskey whilst flashing his badge. As Einstein suspected, the bartender laughed and poured him a drink before asking him where he got such a realistic looking badge from. A question Einstein responded to by saying “I’ll take you to the place it came from” and arresting the guy. A one-liner so cool it’s hard to believe it came from a guy who looked like a half-melted candle shaped like a man midway through shitting himself.

This anecdote would become one of many whispered about Einstein by his fellow officers during his time as a prohibition agent, many of whom who would eventually come to respect and resent him in equal measures for his comically brazen antics and penchant for theatrics. For example, Einstein liked to walk into bars in outlandish disguises, seemingly just to see if he could, something that saw him posing as everything from a professional football player to a black man. The latter of which was reportedly convincing enough for Einstein to get served at a bar in Harlem. 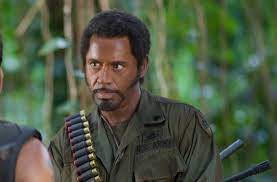 Einstein’s favourite tactic though was to simply walk in as himself, which he was inexplicably still able to do in bars where there was literally a photo of him on the wall telling people who he was and not to serve him alcohol. Hell, on one occasion Einstein posed beneath such a photo just to see if anyone would recognise him before pulling out a warrant and arresting the entire bar when nobody did.

By far our favourite story about trying to stop Einstein though is when one bar, upon learning Einstein was Jewish, demanded everyone ordering alcohol take a bite out of a ham sandwich before they could be served. A countermeasure Einstein avoided by, we shit you not, slyly blowing the ham out of the sandwich without anybody seeing it.

Stuff like this unsurprisingly emboldened Einstein who once bragged that he could find a speakeasy or bootlegger and make an arrest within 30 minutes of arriving in a new city. A boast Einstein delivered on multiple time, sometimes arresting bootleggers within minutes of starting a shift while we should add, being flanked by the press who he frequently invited to document his exploits.

Einsteins fastest bust though took just 35 seconds and occurred moments after delivering a press conference at which he loudly exclaimed he’d make an arrest within the hour. The story goes that after saying this Einstein climbed into a nearby cab and asked the driver where he could get a drink, to which the driver responded by turning around and offering Einstein a drink from his flask. A story so stupid you know it has to be true because if we made it up, you wouldn’t believe us.