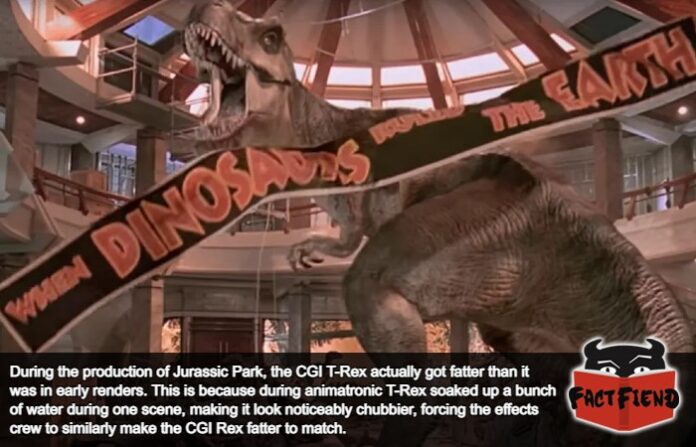 According to Stan Winston, one of the reasons the T-Rex in Jurassic Park is so memorable is because they treated the 40 foot long animatronic like a member of the cast. Albeit one that acted like a total diva. Something epitomised by the fact the T-Rex forced them to make changes to the film’s CGI because it put on weight during production.

To explain, whilst Jurassic Park is remembered today for being a CGI showcase quite a lot of the film’s dinosaur action was realised using practical effects including a giant fuck off T-Rex best remembered for headbutting the roof off of a jeep full of screaming children. 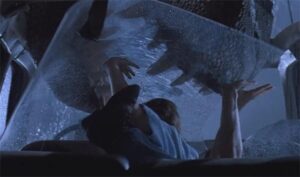 A mechanical behemoth made from 4 and half tons of wires, foam latex and hydraulics, the T-Rex was a mammoth undertaking that took months of painstaking work to realise and was so large and in charge that they literally had to raise the roof of the studio to build it. As an idea of how large the animatronic was, whilst constructing the T-Rex a member of Winston’s crew had to climb inside of it and was genuinely at risk of being fucking killed by it. Meaning there’s a guy out there who was genuinely at risk of being the first person in history to be eaten by a robot and a dinosaur at the same time.

Anyway, as you might imagine the sheer size of the T-Rex meant that filming any scenes with it were a quite literal, massive undertaking that required days, if not weeks of planning to execute. Especially when for some inexplicable reason, the crew making the film didn’t tell anyone at Stan Winston Studios that they wanted to film scenes with the dinosaur in the rain. 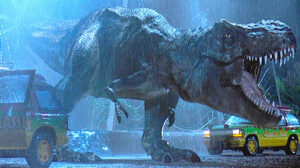 This was a problem because, as mentioned, the dinosaur was largely made of foam rubber which soaked up the water faster than a sponge in a dishwasher and added thousands of pounds of weight to the animatronic. So much weight in fact that the dinosaur would frequently “sneeze” and shudder, seemingly at random and so loudly that members of the crew were legitimately scared of going near it.

Something that resulted in people having to towel the Rex off between takes which is amazing, largely because it means someone on the set of Jurassic Park got to write “dinosaur polisher” on their résumé after filming wrapped.

Whilst this is admittedly hilarious a more costly issue caused by the water is that it caused the animatronic to get noticeably larger, so much so that the CGI model they’d created for the scene didn’t match it. Which was a problem because the entire scene hinged on there being a seamless transition between all the CGI and practical dinosaur action and a thicc-ass robo-dinosaur would kind of ruin that. Because slimming down the practical effect wasn’t an option the CGI artists working on the scene had to instead give the CGI T-Rex a fatter ass so it’d match. Or to put it another way, the CGI artists working on Jurassic Park had to make the CGI version of the T-Rex chunkier and funkier because the robot version put on weight midway through production.