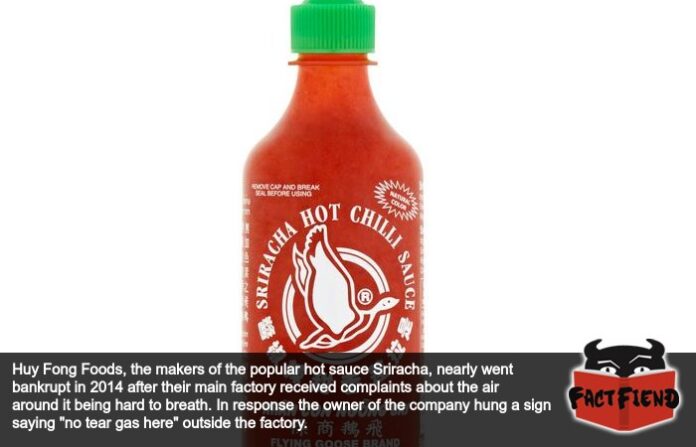 Sriracha is the preferred spice sauce of hipsters everywhere and since being launched, it has quickly become a globally recognised brand worth hundreds of millions of dollars. Something that didn’t stop a small town trying to eject the business from it’s borders because its main factory smelled really bad.

That town is Irwindale, California which has, according to the most recent census data available, has a population of just 1,400 and the main export of which is fucking gravel. That was until Huy Fung Foods decided to up and build their main headquarters and production facility right outside of it. A decision that earned the small town millions in income as well as providing hundreds of jobs to the people who call it home.

Which begs the question, why Irwindale? Well according to the owner of Huy Fong Foods, David Tran, the town actually offered him a loan with “irresistable“ terms to base his then fledgling company within their borders back in 2010. A deal he took them up on, building the aforementioned headquarters and production facility mere months after the deal was inked. However, it wasn’t long until things started to turn sour. Or should we say, spicy.

You see, partly as a result of the amazingly favourable terms they were offered on the initial loan and the stratospheric market success of Sriracha, Huy Fong Foods were able to repay the loan in just a few years. A loan it should be noted had a stipulation that Huy Fong Foods had to pay the town a stipend of $250,000 per year for every year it wasn’t paid off. Anyway, the moment Huy Fong Foods paid off the loan, residents of the town mysteriously started complaining about the factory and the town threatened to shut  it down. 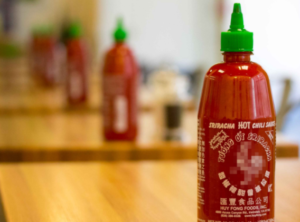 An announcement that came as a shock to David Tran who up until the exact moment his company stopped paying the town, had never had a single complaint about his factory. So what were this complaints? Well according to Tran, people of the town complained that the factory was producing a noxious gas that made it difficult to breath. Which is understandble when you consider that the factory processes millions of chilli peppers each and every year, but it’s important to note that nobody complained about it until the factory was allowed to keep all of its profits.

As you might imagine, Tran was pretty pissed about this and, while the case was going through the courts, defiantly hung a sign above his factory door saying “NO TEAR GAS MADE HERE” whilst also entertaining offers to relocate from pretty much every other state in America. None of which he was too thrilled about because Sriracha is produced in a very specific manner. Mainly that chillies for Sriracha sauce are picked and processed within a day, meaning the factory has to be within about an hours drive of where the chillies are grown. Meaning any factory also had to be within spitting distance of land suitable for growing like a million tons of chillies.

It’s probably also worth noting that Tran is a pretty shitty businessman in that he actually cares about the quality and more importantly, consistency of his product. Something that has resulted in him buying chillies from the same supplier for over 2 decades. In fact, Tran is such a sweetheart in this regard that he has turned down multiple offers to buy his company because they don’t care about the quality of his product, only the profit they could make from it, and outright refuses to buy chillies from anywhere but America as a way of thanking the country for giving him asylum. All things that resulted in a massive outpouring of support for his company when this news broke and Irwindale inexplicably changing their mind when they realised the size and the cash cow they’d lose if his busines moved.