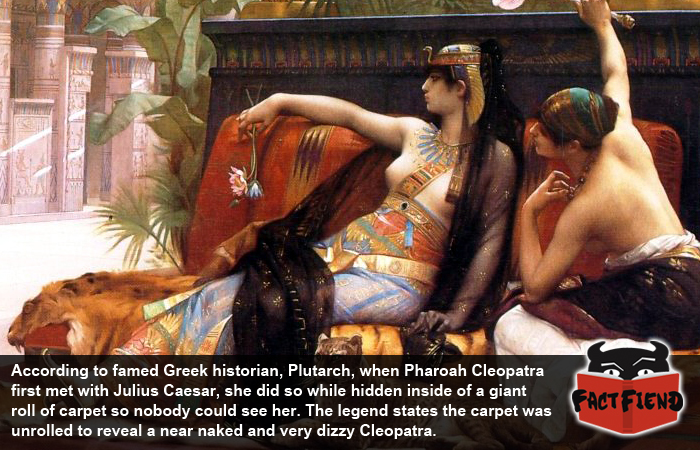 Cleopatra is generally known for either one of two things, being the female god-emperor of ancient Egypt and the impressive amount of high-quality wang she had during her lifetime. Perhaps the most well known of Cleopatra’s conquests was Julius “God Damn” Caesar, and boy did Cleopatra know how to make a first impression.

According to legend, Cleopatra was a super-fox of the highest order and her beauty was said to be enough to launch a thousand ships and for the most part, this is true, if you don’t judge her looks or appearances by modern standards.

Exactly what Cleopatra looked like isn’t totally clear, but historians are generally in agreement that Cleopatra’s most attractive quality to her suitors wasn’t so much her looks as her position as Pharaoh of Egypt, a position she used to bend men to her whim and make them do basically whatever she wanted. Usually some weird sex thing but sometimes grant her a political favor.

Cleopatra in turn seemed to only be attracted to men in a similarly high position of power with their looks or ability to lay pipe (translation: penis) being of secondary concern to the political benefits being joined at the hip would provide.

This said, Cleopatra wasn’t about using her womanly wiles to seduce men and she often, in stark contrast to the times, was more than happy to make the first move on a man or dick she wanted. The most hilarious example of this is the time Cleopatra decided she wanted Julius Caesar’s centurion just all up in her cooch while he was on a diplomatic visit.

According to legend, to begin their illicit love affair that would eventually come to shape the Ancient world, Cleopatra stripped naked save for her best “come to bed eyes” and a shit ton of eye shadow and had her servants roll her inside of a gigantic carpet. She then gave the order to her slaves to deliver this carpet to Caesar’s room. When Caesar opened his door to greet the slaves, they unfurled the carpet at his feet revealing the naked Cleopatra who was now lying on the ground inviting him to into her private chambers.

The ruse must have worked because the pair ended up having just unthinkable amounts of sex. So ladies, the next time you think a guy isn’t getting the hint about you wanting to have some penile relations with him, think about sending him a hint the Cleopatra way.

If you’d like to read more insane and sexy facts about history, why not read about Shipwreck Kelly, the gigolo daredevil who once did a handstand 400 foot in the air while people fed him donuts, or how about taking a minute to learn the story of No Kum-Suk, the North Korean pilot who defected from North Korea, in a jet.