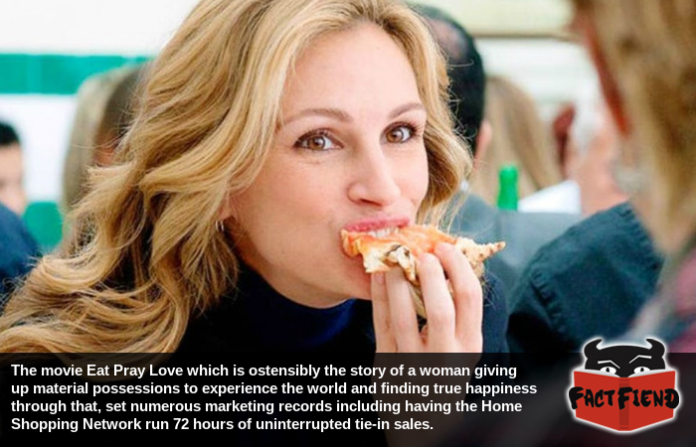 Eat Pray Love is a movie based on a book all about how awesome it is to be rich, white and have sex with Javier Bardem. All things we’d have assumed people would know already but whatever. Anyway, the film is ostensibly about finding happiness not through things, but experiences. A lesson the studio heroically ignored in lieu of selling a whole heap of shit with Eat Pray Love branding on it.

For anyone who hasn’t seen the film or read the book it’s based on, it’s about a rich white lady called Elizabeth Gilbert who goes seemingly has everything but still feels empty and unfulfilled. Basically she’s like a female version of Edward Norton from Fight Club only instead of beating up Jared Leto in a parking lot to make herself feel alive again, she fucks James Franco.

Moving on, after her fling with James Franco understandably ends poorly, Gilbert travels the world and learns to appreciate the simple things like food and taking a year off work to fuck random dudes in exotic locales. Something in recent years people have kind of criticised the book and film for because yeah, of course having enough money to travel the world and fucking one of the sexiest men alive would make someone feel better.

Now ostensibly the key “lesson” the film imparts it’s that life is about enjoying experiences, not things. Hell there’s a scene in the film where Gilbert specifically tells her friends not to buy her anything for her birthday and instead donate whatever they were going to spend to an impoverished woman she met whilst rich-white-ladying her way across Asia. Which makes it kind of hilarious that the movie ended up setting numerous records for the sheer amount of shit they managed to slap an Eat Pray Love sticker on and sell to the public.

For example, according to one source the studio signed deals with companies that made everything from rugs to fucking gelato machines as well as a bunch of other stuff that made even less sense like candles with Buddhas on them and an oversized bench priced at a very reasonable $359.99. All in all the film ended having in excess of 400 different product tie-ins culminating in the Home Shopping Network running a 72 hour long Eat Pray Love themed shopping extravaganza. Remember, this is a film about giving up material possessions. 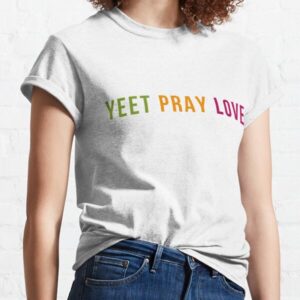 It gets better though because when the book’s author, the aforementioned Elizabeth Gilbert, was asked about the hypocrasy of having so many product tie-ins for a movie about, well, not owning things, she sagely point out that not everyone has enough money to just up and take a year off of work to travel the globe. When asked what the fuck she meant by this, Gilbert clarified that to some people maybe “buying a candle” was a good substitute for a life-altering journey of self-discovery costing tens of thousands of dollars. Which yeah, makes sense.