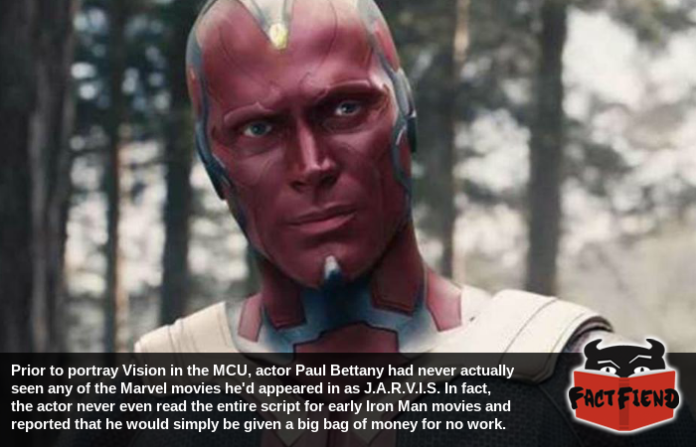 We think it’s safe to say that almost every actor who has a recurring role in the MCU fucking loves Marvel, if only due to the career resurgence being in the most popular series of movies in history causes. A seeming exception to this is Paul Bettany, an actor who didn’t even watch the movies he was in.

If for some reason you don’t recall the earliest films in the MCU, prior to playing the invincible Vibranium-coated robot Vision, he played the closest thing the Iron Avenger had to a confidant, J.A.R.V.I.S. A hyper-intelligent A.I. that basically ran the Iron Man suit. Because let’s face it, without a bleeding edge, billion-dollar A.I. to handle the majority of the moment-to-moment calculations involved with propelling a human being through the air via proprietary repulsor technology, Tony Stark would have been a pretty shitty hero.

Anyway, throughout the films in which J.A.R.V.I.S. he is shown to be an integral part of the established universe, proving himself to be both an indispensable asset and dare we say, a friend to Tony Stark. Hell, in the first movie J.A.R.V.I.S. is shown to run his entire house and, with help from Pepper Potts, kicks his booty calls out of the house so he can dick around with cars in his basement. Arguably the biggest bro move in the entire MCU.

The thing is, whilst the characters undeniably have chemistry, the same cannot be said for the actors who played them. Largely because they never fucking met. You see, all of Paul Bettany’s lines were recorded and inserted into the film after filming wrapped, with RDJ responding to extras off camera for scenes that required him to interact with to J.A.R.V.I.S. 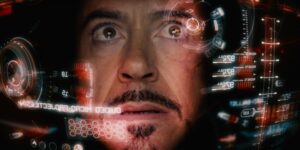 Because of this, during the early days of the MCU, Bettany’s involvement was limited to, by his own admission, 2 hours of recording per film where he sat in a room reading lines he didn’t understand from a script. In fact, according to Bettany Marvel never even bothered to send him a full copy of the script, meaning he literally had no idea what his character was doing in any given scene. Hell, Bettany reportedly didn’t even know that he was going to be in a superhero movie when he agreed to be in the first Iron Man film. That’s how limited his involvement with the films was.

It bets better though because Bettany also didn’t bother watching any of the early Iron Man films, films he had top billing in, because they weren’t his thing. Which, as you might imagine, made interactions with fans incredibly awkward as he never knew what to say to them when they asked about the MCU. For the curious, Bettany’s reported usual response to people asking about the MCU was to say that he felt like a pirate because all did was turn up to read from a script for two hours and for this, was given a large bag of money. 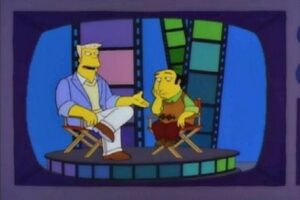 Then again, we think it’s kind of meta that the guy playing Iron Man’s assistant was paid a massive amount of money for doing a piss-easy job.