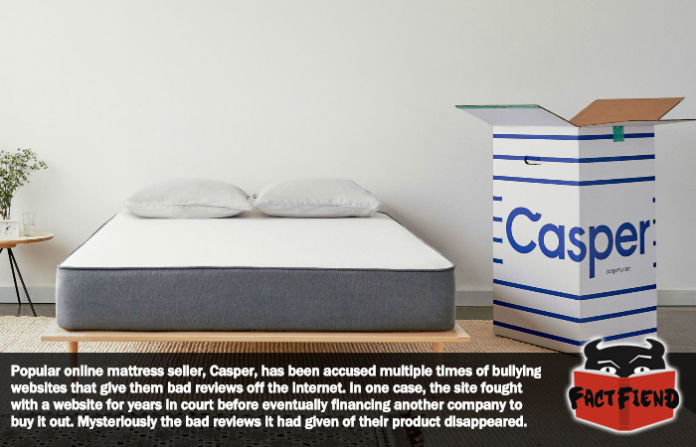 Online there are like three things shilled by podcasters and YouTubers, crappy razors, shitty website building services and mattresses of varying quality. In regards to that last one, arguably the king of the online mattress slinging world is Casper, which may have something to do with the fact they will sue the fuck out of anyone who dares give their product a bad review.

First though, a disclaimer, according to Casper themselves, the cases were about to discuss weren’t about negative reviews, but deceptive business practises. Specifically the online mattress giant all alledged that the sites it was suing the balls off of, were directing consumers to competing products without disclosing that they were earning commissions on each mattress sold via affiliate links and shit like that.

While this may sound perfectly reasonable, we should probably point out that Casper itself engaged in this exact kind of behaviour before inexplicably deciding not to do it anymore, usually singling out reviewers who’d given less than stellar reviews to Casper products as the ones to exclude from its affiliate program. Something you should absolutely not read too much into unless you want to risk staring down the barrel of a Casper’s legal shotgun. 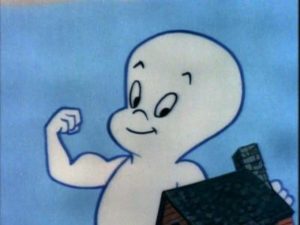 Now if Casper was just suing mattress review sites that’d be one thing, but here’s where things get all kinds of sad and pathetic because according to leaked emails, the co-founder of Casper, Phillip Krim went as far to personally email the owners of sites giving bad reviews to nudge them into maybe changing them. For example after the site Mattress Nerd wrote a less-than-kind review of a Casper mattress, Krim emailed the owner saying that while he unequivocally supported the right of the site to be objective in its reviews, he was disappointed to see the site recommend another mattress. Now this on its own is already all kinds of unprofessional and a little sad, but wait, because it gets better.

After Mattress Nerd reiterated that their review of the Casper mattress wouldn’t be changed, Krim doubled down and offered amongst other things a free trip to New York (you know, to really test out the mattress) and more money via its affiliate program. A short while later the site mysteriously started giving Casper mattresses glowing reviews and became one of its leading online partners. Something we are in now way saying was as a result of Casper throwing money at the site because we’re suddenly terrified of the power companies selling mattresses wield.

Perhaps the most impressively petty thing Casper did though was when it got into an online tiff with Sleepopolis, a leading mattress site that for years had, had a small disclaimer on every review of a Casper mattress encouraging people not to buy them. A move known in the business world as “a big-ass flex”.

Casper reportedly fucking hated this little box, especially when they realised that due to Sleepopolis popularity online, the reviews it posted for Casper products (that remember, all had this disclaimer on them) would be the first things returned when you searched for Casper on Google.

The owner of Sleepopolis, who we are informed owns massive steel-plated balls, defiantly refused to change the reviews on his site or bend to Casper’s will, much to the company’s reported annoyance.

The case raged on in court for years until eventually, Sleepopolis’ founder Derek Hales decided he was done, settled the case and according to rumors online, sold the site for several million dollars and fucked off. A move we respect deeply for the completely and utter lack of fucks shown.

What happened next though is kind of amazing because after the case between Sleepopolis and Casper was settled, Sleepopolis was bought out by a conglomerate of other mattress review sites. A conglomerate financed by, you guessed it, Casper. While Casper has adamantly denied that there was any ulterior motive to financing the buy-out of the site, overnight the reviews of its products went from good, but not great, to largely positive. Oh and that annoying little disclaimer pointing people towards other mattresses were replaced with a coupon to get a discount on Capser products. Which we are absolutely not going to read anything into.