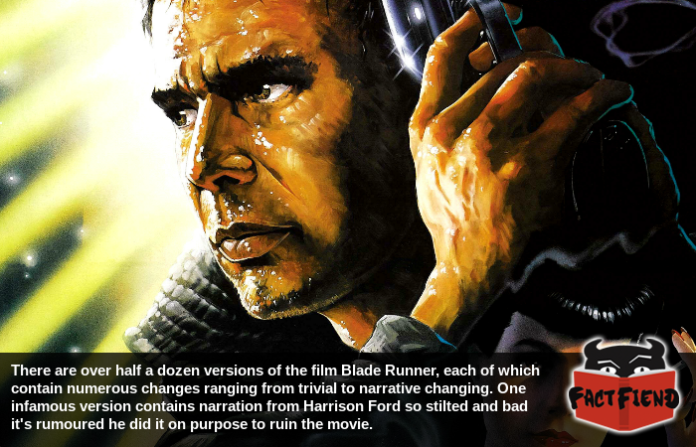 At the time of writing this article there are 7 known versions of the film Blade Runner, some of which are so different from the original vision of director Ridley Scott he has openly shit-talked them in interviews. Perhaps no version is more controversial than the one Harrison Ford personally attempted to sabotage, erm, allegedly.

Specifically the version of Blade Runner we’re talking about today is the 1982 US theatrical release which has since been shit just all over by both Ford and Scott as well as fans, critics and pretty much everyone who likes the film. In particular criticism is levied against the theatrical cut due to the inexplicable inclusion of a “happy ending” which directly contradicted the intention of Ridley Scott who wanted the film’s ending to be ambiguous to fit with the tone established by the rest of the film. 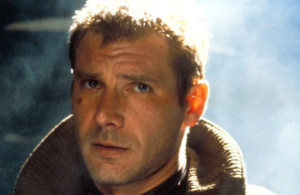 In fact, Scott hated the inclusion of this ending so much (it was added by the studio without consulting him) that when he got a chance to have input on a proper director’s cut, he immediately cut that shit out. In addition Scott saw to it that narration from Ford (which was similarly added without his input) was also cut. A decision we assume Ford fully supported given that he hated recording it in the first place.

You see, it’s noted that during the production of Blade Runner Warner Bros (the studio responsible for distributing the film) repeatedly made it known that they didn’t like the films ambiguous tone and pushed for a voice-over to explain what was going on. Something neither Ford nor Scott liked the idea of because it was supposed to be a fucking noir film.

However, at least according to Ford, it had been “tacitly agreed” during production that despite the studio’s push for a voice over, the final film would contain little to no narration. This changed though when Warner Bros previewed the film to test audiences and a number of them reported that they didn’t understand the film, presumably because they were idiots but also possibly because they were morons.

As a result, Ford was brought back in to record a voice over that explained everything that was going on. Something Ford has publicly voiced his displeasure about, noting wryly that the inclusion of the voice over turned Blade Runner into a film about a “detective who did very little detecting“. 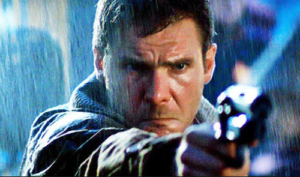 In fact Ford was so annoyed about being brought in to record the lines that he would reportedly criticise them mid-take and even laughed at how bad they were after recording them in full view of the guy who wrote them. The end result were line-reads so piss-poor that many assumed Ford had deliberately fucked them up in the hope they wouldn’t get used. A claim he has repeatedly denied, claiming that he simply did his best with the (exceptionally shitty) material he was given.

However, it’s also worth noting that Ford has openly admitted that he hated every second of the recording process and that he was dragged “kicking and screaming” into the recording booth to read the lines. Which probably explains why he sounds audibly pissed off during that version of the film. Then again, that’s pretty much Harrison Ford’s default mood so it’s hard to know for sure.