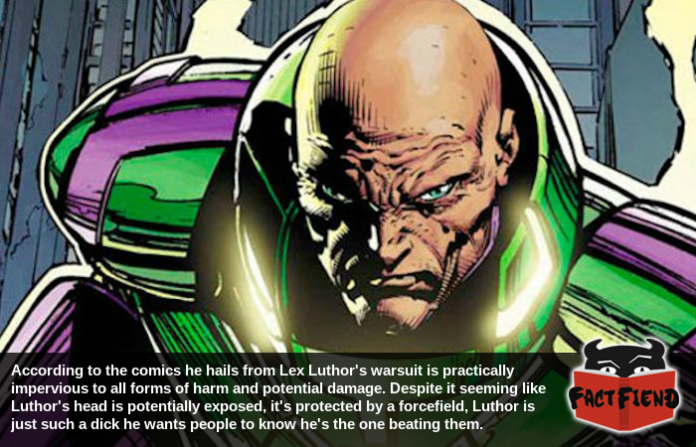 In DC comic canon, Lex Luthor is an megalomaniacal turbo-genius with enough money to buy the northern hemisphere. A self-admitted egomaniac, Luthor is so obsessed with his self-image that he built a hyper-specialised warsuit capable of combating Superman that leaves his entire face exposed purely so that people know it’s him beating down the Man of Steel.

Now due to the numerous retcons the DC universe has had over the years, there are many iterations of the warsuit that have appeared in DC canon. However, a common trait shared by near-enough all of them is that Luthor’s face is virtually always exposed. 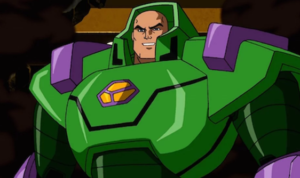 To highlight how stupid this seems at first glance it’s important to realise that each of Luthor’s warsuits is filled to the brim with bleeding edge technology that allow him to fight beings as strong as fucking Superman. In addition to enhancing his strength to almost incalculable levels, the suit contains Kryptonite weaponry, an advanced AI that allows it to function autonomously and is linked to all of the satellites Luthor’s company has in orbit allowing him to call down a Hammer of Dawn-esque super laser to obliterate his opponents.

All things that make the fact Luthor’s face is seemingly completely exposed to everything from a stray bullet to a piece of falling debri so baffling. Hell, even other villains have commented on this apparent, glaring weakness and called Luthor on in in the past.

The thing is, the suit doesn’t have a helmet because, well, it doesn’t need one. You see, Luthor, being a ultra-paranoid mega-genius, has of course developed force-field technology sophisticated enough to stop blows from beings like Superman. Said technology completely covers the entire war suit, including Luthor’s head, and as a result, he can walk around with his face “exposed”.

This of course begs the question, why? Well, while in some comics Luthor has claimed that not having a helmet on the warsuit prevents his vision from being obstructed, the real reason is that he’s a smug dickhead who wants everyone to know that it’s him kicking the shit out of Superman in a robotic god-suit of his own design. 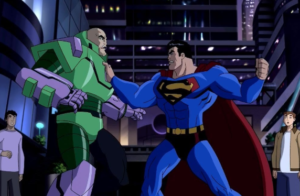 Of course, this same bravado usually results in Luthor getting his shit pushed in, but you kind of have to respect a guy who whales on the strongest being in the universe in a suit powered by his own genius just because he wants to show off.