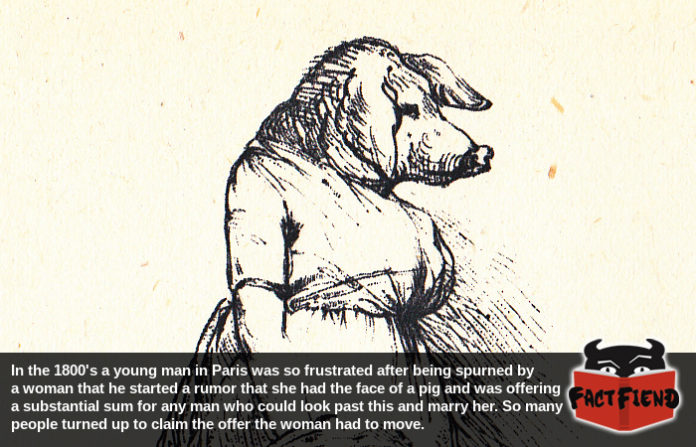 Ask any woman who’s ever used Twitter, Tinder, Facebook, Snapchat, Tumblr, Email, MSN or those owls from the Harry Potter movies and they’ll happily tell you that men, especially men trying to flirt or hit on your, are assholes. Although the internet has made harassing a woman who has the audacity to not be that into you easier than ever before, before the internet existed, enterprising shitheads still found ways to let women know that not going out with them was a completely justified decision. Like the unnamed Parisian who harassed a woman so much in the 1800’s she moved.

The story goes that sometime in 1814-1815 (sources don’t offer an exact date on when this occurred) some French wankbeard tried to hit on a well-to-do Parisian lady who politely rebuffed his advances. Incensed at the idea of a woman having agency and feeling confident enough in herself to turn him down, the guy’s infatuation festered and turned into resentment.

Shortly thereafter the guy suddenly decided that the woman he’d tried and failed to hit on wasn’t that attractive anyway and started a rumor that she had the face of a pig. You know, just like how you can find countless examples today of guys near-instantly deciding that a woman is an ugly fat bitch the moment they realise they’re not going to get a response.

Just to be clear as well, this guy didn’t start a rumor that this woman was ugly or anything like that, he literally claimed that she had the face of a pig and people totally believed him. If you’re wondering how someone could possibly believe something so ridiculous, at this point in history the idea of a wealthy woman with pig-like facial features hiding from the world was one that had existed in folklore for about 200 or so years and was incredibly popular with the public. Along with there being countless urban legends and tall tales about women hidden away in darkened rooms with snouts and trotters, it was common for shysters and charlatans to fool the public into believing the legends were real by shaving drunk bears and telling people they were actually severely deformed women. None of that is made up.

This all combined to make the general public very susceptible to believing that pig-faced women were not only real, but a common fact of life everybody knew about. It probably also helped the unnamed Parisian cocksniff who started the rumor that an almost identical story had been spread around London a year or so earlier.

But it wasn’t enough for the guy to simply spread a rumor that the girl who’d punched his ego in the nutsack was an ugly, subhuman monster, he had to make sure she never felt comfortable in her home again. Since social media wasn’t a thing yet, the guy decided to instead tell everyone who’d listen that the woman was so fuck-ugly that she was offering a massive sum of money to any man who could look past her features and marry her.

The promise of money caused the woman’s house to be swamped by suitors all proclaiming that they’d fuck her for money regardless of how ugly she was. On top of this members of the public would bang on her door at all hours of the day and night and stand outside her window yelling obscenities, hoping to catch a glimpse of a human-porcine hybrid.

The harassment was so severe and went on for so long that the woman eventually decided “fuck this” and moved (she was rich remember so this was totally an option). The guy responsible on the other hand probably spent the rest of his life feeling like a smug asshole for taking that stuck up bitch down a peg. The only consolation we can offer is that, that guy probably never got laid after that given that his apparent stock response to a woman not being interested was a targeted public campaign of harassment.