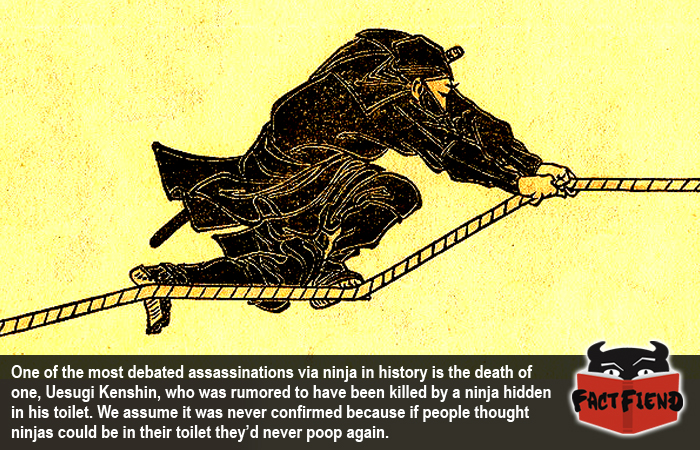 This article was recently turned into a video, because of course it was.

If videos aren’t your thing, you can read the original article below.

According to joy-hating historians, ninjas virtually never dressed all in black while stalking Japanese warlords through a moonlit forest, mostly using their skills of stealth and subterfuge to stab people when they were asleep or set their house on fire while dressed as a monk or peasant. Then you have the story of the ninja who stabbed a guy to death, through his asshole!

The reason ninjas are both feared and respected in equal measures, even today in an age where we have guns and rings that make backhands really hurt, is because, according to pop-culture, one of them could hide in your bowl of cereal and you wouldn’t see them until your throat was half-way across the room.

Though as mentioned above, ninjas never really wore black, (in fact if anything they wore dark blue), they did kill and maim people throughout feudal Japan and it’s almost certain that hundreds of people were silently cut down by these stabby agents of death. One particularly famous ninja called Jing Ke even once managed to get into a fist fight with the Emperor of China himself before he was killed by a crowd of angry peasants.

One of the more enduring stories about a ninja assassination is the death of Uesugi Kenshin in 1578, whose death has been a hotly debated topic for centuries. Modern scholars insist Kenshin was killed by a combination of stomach cancer and not possibly shitting himself so hard his heart exploded, whereas the winds of history have always carried rumors that maybe, just maybe, Kenshin’s death was more awesome than his peers let people believe.

The story goes that an unnamed ninja assassin made their way into Kenhin’s home and true to their ninja training, sought to attack him when he most vulnerable, in other words, when he was taking a dump and they had a clean-ish shot at his internal organs in the smelliest and directest way possible. To do this the shadow assassin snuck into his sewage pit and lay in wait with a spear (some sources say a sword), patiently waiting for a poopy brown target to present itself.

When Kenshin entered the bathroom to relieve himself using a weird Japanese custom we’re too scared to search for on Google, the assassin plunged the weapon right into his butthole, causing him severe internal injuries that outright killed Kenshin several days later. Although we can’t imagine a cooler thing to write on a tombstone than “stabbed to death by a f*****g ninja on the toilet”, Kenshin’s peers supposedly denied the involvement of any of Scorpion’s cousins. Which is weird, since they still mentioned him taking a turn for the worse on the toilet, which only raises more questions than it answers. Why mention Kenshin being on the toilet if he wasn’t attacked by a ninja on it!? Come on, Japan.

So we’re going to let you decide what happened here. Either Kenshin died of stomach cancer and took a nasty turn on the toilet that his friends decided to tell everyone about for some reason, or a badass ninja stabbed him in his rear-exit and his friends were too ashamed to admit it. We know which one we want to believe.