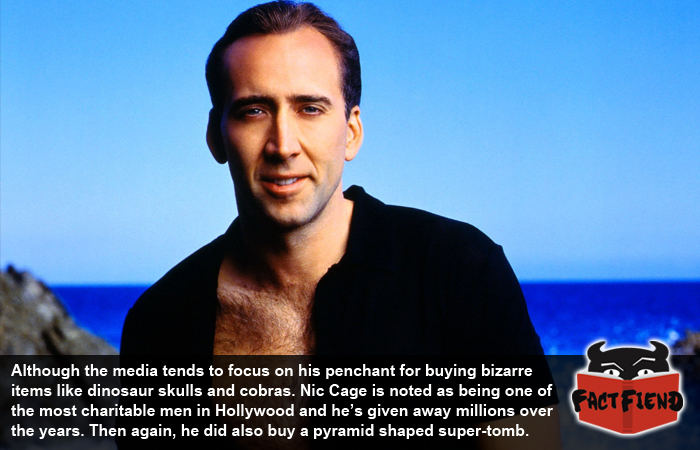 This article was recently turned into a video and of course features many clips and stories about Nic Cage being a crazy, eccentric asshole, you can check it out below.

If videos aren’t your bag, as per usual, the original article can be found below.

Spend enough time online and you’ll eventually learn a lot about the mysterious and legendary figure known to the world as Nicolas Cage. Over the years much has been written about Cage and not a lot of it is flattering, so we wanted to correct that by explaining how Cage is quite literally one of the most generous celebrities out there.

As noted in the image at the top of this screen, Nicolas Cage has become the butt of many an internet joke due to his increasingly peculiar spending habits. Depending on which source you consult, Cage has bought everything from a fleet of Rolls Royces to a pile of albino cobras and it seems like everyone in Hollywood has at least one story detailing the crazy shining diamond that is Nic Fucking Cage.

For example, according to Sean Bean, Cage for reasons known only to himself, owned a big-ass prehistoric bear skull that he kept perched beside his bed. During a drunken game of pool Cage accidentally smashed the skull and the next day he went and buried it in a field near his house instead of paying someone to repair it.

While we’re not denying that Nic Cage is a weird guy, because he kind of is, it comes with the territory of being a millionaire, but we personally feel it’s a little unfair that out of the hundreds of stories that focus on Cage’s spending habits, few of them ever discuss the millions of dollars he’s given to charity. As noted by, Look To The Stars, a website dedicated to tracking and recording the philanthropic actions of celebrities, Cage supports no less than 14 different causes and has made two substantial million dollar plus donations to charities aimed at helping child soldiers and victims of Hurricane Katrina respectively.

Cage is such a charitable man that Forbes list him as one of the most generous stars in Hollywood, placing him alongside the likes of Oprah and Bono. The only difference is, Nicolas Cage doesn’t act like an entitled asshole all of the time because of the charities he supports and he doesn’t make a huge deal out of it when he does make donations.

But that’s not all, in 2008 Cage was accused by Kathleen Turner in her memoirs of once getting drunk and stealing a chihuahua which, well, kind of sounds exactly like something Nicolas Cage would do. In response, Cage sued her for libel and won, because Nic Cage apparently isn’t an asshole who steals dogs. Instead of demanding money from Turner or the newspapers that ran with the story without fact checking it, which he was entirely within his rights to do, he instead requested that everyone involved make a charitable donation to a charity of his choice. Meaning Nic Cage is so charitable that he’s actually resorted to donating money by proxy!

What we’re trying to say is, Nic Cage might be a weird guy who randomly buys crocodiles and pyramid shaped super-tombs, but he’s also given millions of dollars to charity and spends countless hours raising awareness for at least a dozen worthy causes. So maybe he’s earned the right to be a little weird, or at least not have people be a dick about it when he is.