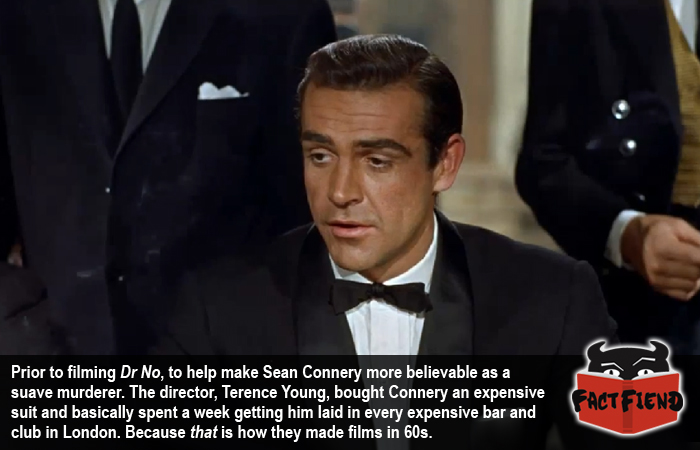 To most people, Sean Connery is James Bond, in fact he’s so James Bond that the author of the books, Ian Flemming, made Bond half-Scottish after seeing Connery utterly own the role in Dr No. But did you know that to get Connery into character in the first place, the director of the film basically spent a week getting shit-faced with him?

First things first though, we’re going to tell you how Connery even got the role in the first place because it’s freaking brilliant. The story goes that when Connery originally tried out for the part, the people in charge of casting and even Ian Flemming himself didn’t think he was right for the part. Flemming in particular felt that Connery, the 6ft2 ex-bodybuilder built like a brick shithouse, was too muscular and intimidating to play a man as suave and sophisticated as Bond. In fact, Flemming originally wanted this guy to be 007.

That’s David Niven, who actually did go on to play Bond in a roundabout way, but that’s a story for a different time, all that matters is that originally no one felt that this man was James Bond.

That is, until they watched him leave the audition. Yes, amazingly, it wasn’t until the casting people watched Connery physically leave the studio that they were sure that he was the man who was going to play Bond. You see, the producers, Albert R. Broccoli (seriously) and Harry Saltzman watched Connery leave the audition through their office window and the sheer balls-out confidence of his crotch first, sexually charged “panther-like” strut was so perfect they instantly decided to give the role to him. Before you Google it, yes, they actually described Connery as “panther-like“. In other words, Connery secured his role as Bond because he was just that cool.

Though Connery had the sheer sexual magnetism part nailed and then some, director Terence Young felt that he was still a little rough around the edges when it came to style and sophistication. To correct this, he  took Connery to a tailor and had him fitted with a suit so sharp could give a crystal shark paper cuts the proceeded to spend a week with the actor getting absolutely bombed off his tits.

In other words, to get Connery used to the idea of being a super-spy who wangpaled his way through half the phonebook, the director of Dr No spent a week turning him into a world-class poon-hound. We’d say something, but hey, you can’t argue with the results.