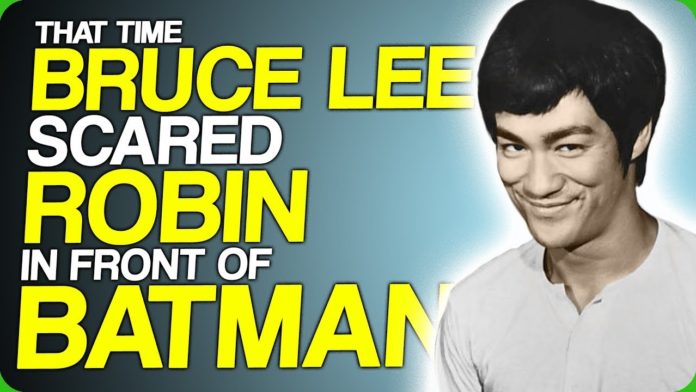 We talk about Bruce Lee a lot on this website, usually for one of two reasons. One, we have a man crush on him and two, we think he’s awesome. For example did you know he once scared Robin shitless in front of Batman.

For this story we have to go back to 1967, a time when Bruce Lee played second fiddle to a middle-aged man in a stupid hat on a show called The Green Hornet.

Now we’ve talked before about how Lee’s martial arts prowess saw the show being marketed as “The Kato Show” in Hong Kong because everyone watching just assumed he was the main character because of how hard he wrecked everyone’s shit in a fist fight. It’s worth noting however that Lee’s skill and ability to obliterate orbital sockets with backhands was something western fans were also keenly aware of. This presented a bit of a problem when the Green Hornet and Kato were set to meet Batman and Robin in a crossover episode because the script called for the two heroes’ sidekicks to face off with one another.

This in of itself wouldn’t have been that big of an issue if the script didn’t also call for Kato to lose. Yes, that 100 pound sack of man wearing a silk cape and his underwear on the outside was scripted to beat the shit out of Bruce Lee in his prime because he was on the more popular show.

Apparently nobody involved with either show could believe the script and everyone including the guy playing Robin, Burt Ward openly acknowledged that nobody would buy that Robin could beat up Kato. Lee especially was reportedly pretty pissed and upon reading the first draft, simply telling the producers “I’m not going to do that.” before walking off set. A hasty rewrite later and the ending to the fight was changed so that Robin and Kato would fight to a draw to appease fans of both shows. Lee reportedly saw this change and decided it present a perfect opportunity for some mischief. 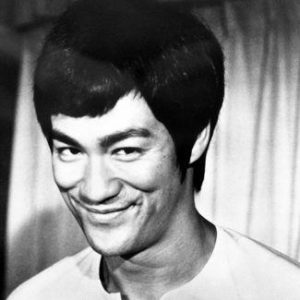 On the day of shooting Lee turned up in full costume and refused to talk to anyone, instead spending the entire morning glaring at Ward. When the the time came for the two to fight, rather than sticking to the agreed upon choreography, Lee walked straight at Ward as if he was going to punch his head clean off. Ward responded by stumbling backwards over the furniture while yelling at Bruce to calm down because it was just a TV show. Remember, all this happened while Adam West was watching from the sidelines dressed as Batman.

As Ward became more and more agitated, his voice breaking as he attempted to reason with the walking liver pummelling that was an (apparently) angered Bruce Lee everyone on set realised what was going on. Lee was just fucking with Ward. To break the tension and spare Ward – who was probably close to shitting his pants at this point – any more embarrassment an unnamed crew member began making loud chicken noises which caused Lee to break down and begin laughing. He then told Ward that he was lucky it was a TV show before returning to his original mark to finish the scene the way the script asked. In a draw with them both getting one good hit in each.

This was enough for Lee who had already established in front of the entire crew and Batman that Ward was shit-scared of the thought of fighting him for real.

What makes this whole thing super weird is that Ward really should have seen this coming given Bruce Lee’s reputation as a huge troll and the fact they lived in the same apartment complex for years.  Then again, it’s probably pretty hard to think straight when you’re worried about Bruce Lee wanting to punch you in the head and he’s stood right there.