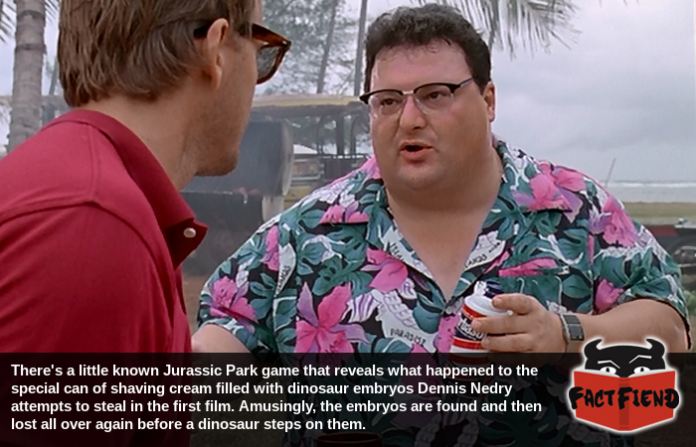 Jurassic Park is a masterpiece of modern cinema that helped define the modern blockbuster. However, this doesn’t necessarily mean the film is without its faults or unresolved plot points, one of which is the ultimate fate of the dinosaur embryos stolen by Dennis Nedry. A plot thread that was resolved in a game almost nobody played in a spectacularly unsatisfying fashion.

First though, if you don’t remember the plot of Jurassic Park, firstly, shame on you and secondly, the film’s plot hinges on the fact that Dennis Nedry (played by Wayne Knight) shuts down all of the titular parks security systems to steal some dinosaur embryos at the behest of a rival corporation who wants to make their own dinosaurs.

Exactly why Nedry wants to steal the embryos is somewhat unclear with it being alluded to during the film that he has money troubles and that his boss isn’t paying him enough. You know, the same boss who spends half the film’s run-time talking about how he “spared no expense” in between complaining that nothing in his park works.

Moving on, around the halfway point of the film Nedry, to put it lightly, gets wrecked by a dilophosaurus that sprays acid in his eyes before, we assume, eating his dick off. During this dinosaur attack Nedry drops the dinosaur embryos that have been handily hidden away inside of specially-made can of shaving cream at which point they are unceremoniously buried beneath the mud.

Within the context of the story, those embryos are worth a fucking fortune and it’s established that the can keep them alive for 36 hours and as a result, there’s technically an almost 35 hour window after Nedry’s dick is eaten by the dinosaur that they could have been recovered. Now the ultimate fate of the embryos is never alluded to in any sequel to the films, so many fans assumed they were just left behind and forgotten like Nedry’s remains. Enter, Jurassic Park: The Game.

This game, which was released to little fanfare and had modest sales, reveals that Nedry was set to meet up with two contacts who become annoyed when he doesn’t turn up and attempt to track him down. For plot reasons these characters somehow manage to find the embryos (which remember were last seen completely obscured beneath several inches of mud) and then try to escape the island.

During the course of the game the embryos change hands more than a juggler’s balls and become a central plot point. In fact, the entire final act of the game revolves entirely around choosing between saving the embryos or one of the game’s main characters. 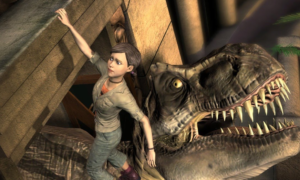 The thing is, no matter which option you choose, the embryos end up being destroyed, either by being crushed by a rampaging T-Rex or once again left to rot in the mud. Meaning the entire plot of the game is basically pointless and kind of hilarious when the majority of it revolves around people getting into fistfights over a can of shaving cream.

A fact that makes us kind of wish Wayne Knight’s idea for a sequel was used instead, which for anyone who doesn’t know would have involved Nedry surviving the dinosaur attack and returning in a later film with an eyepatch and a hook for a hand we presume he’d have customised purely to bitch-slap dinosaurs.