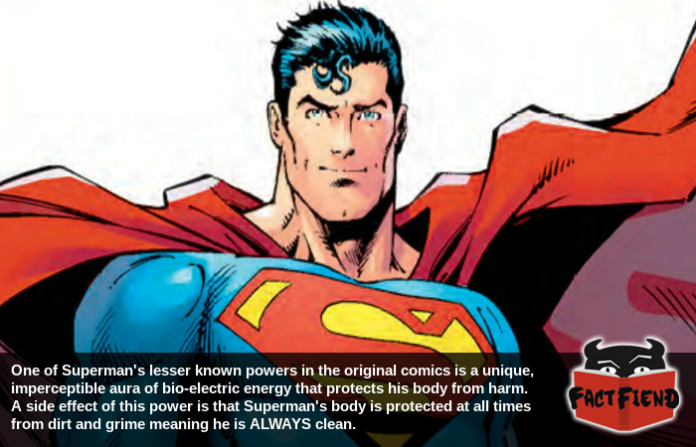 Superman is a comic character with more powers than an FBI agent playing World of Warcraft, many of which have been ret-conned over the years. However, one power that has been a staple of Superman’s arsenal for years is one that has the bizarre side effect of meaning he can never, ever get dirty.

The power, which is supposedly unique to Kryptonians in the DC Universe, is an invisible, imperceptible “bio-electric aura” that surrounds Superman’s body at all times. Exactly where this aura comes from isn’t known, but a theory proposed in several comics starring the Man of Tomorrow is that its source is an organ somewhere in his body we don’t know the function of.

Now while we don’t really know anything about this organ various comics have suggested that it is in all likelihood powered by solar radiation from a yellow sun, which Superman can absorb in almost limitless quantities to enhance his various abilities. Because oh yeah, for anyone who didn’t know, Superman is basically a giant solar battery strong enough to punch through time itself.

Moving swiftly on, in regards to Superman’s bio-electric aura it’s noted that although Superman can exert control over it with concerted mental effort, it functions mostly autonomously, protecting him from harm. A power that seems a little redundant when you realise that Superman’s Kryptonian physiology means his body his virtually indestructible. Which probably has you wondering, why does Superman have this secondary power if he’s already immune to all forms of conventional harm? Well, the answer is to explain how Superman can do shit like this without the object shattering like the screen on an iPhone being used by the Hulk. 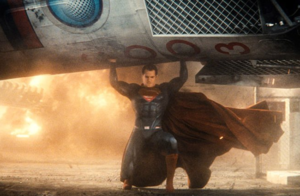 Specifically, various comics have established that Superman can, through sheer will, expand his bio-electric aura to encompass objects he’s holding or even other people. The effect being that the object is held together even when logic and physics dictate it should fall apart. Or to put it another way, writers were sick of smarmy comic fans asking why Superman’s hands don’t punch through the nose of a plane when he tries to stop it crashing and bullshitted an explanation.

Speaking of which, other writers have further established that the aura naturally exists a few millimetres above Superman’s skin which is why his regular street clothes can be damaged, but not the skintight dick-hugging costume he wears underneath them. 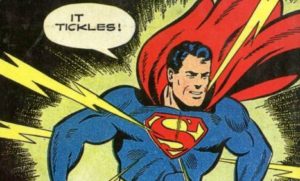 A bizarre side effect of this particular facet of Superman’s power set is that, because there is a nigh-indestructible forcefield surrounding his body at all times, Superman can never get dirty. A fact that means Superman probably smells amazing, which likely goes part way to explaining how a goofy, mild-mannered reporter managed to score with Lois Lane.