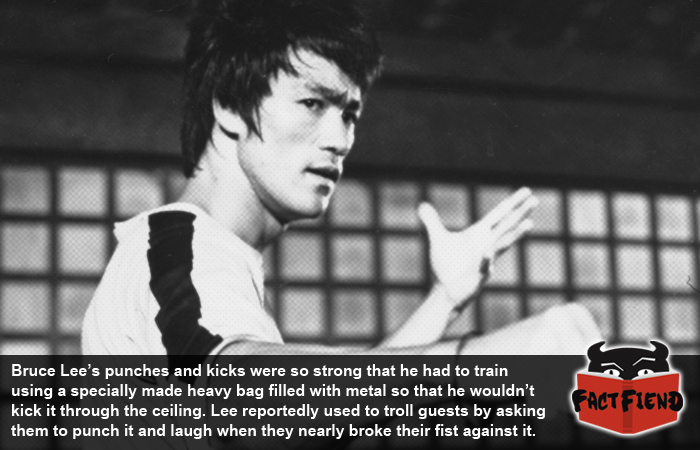 We were asked once if we’d ever stop writing articles about Bruce Lee and in response we said, when he stops being awesome, since that hasn’t happened yet, here’s an article about how he’d troll people he met, with martial arts.

As you can imagine for world-famous martial artist who made women faint just by gently flexing his bicep, Bruce Lee spent a lot of his adult life being asked to demonstrate his skills to random people in the street, as a result Bruce Lee eventually took to carrying around a big padded training shield with him everywhere he went later in life. Bruce would then pass this shield to anyone who wanted to see a demonstration, ask them to brace themselves and then kick them across the fucking room. Lee’s wife was apparently so used to this happening that whenever people visited, she’d open all of the doors leading into the garden so that Bruce couldn’t dropkick them through the window. According to Black Belt magazine, Bruce once managed to kick someone clean over his swimming pool by doing this which we’d say was bullshit if it wasn’t for the fact this is a man who punched so fast you literally couldn’t see it.

Just to emphasize how much of a dick move Lee doing this was if it wasn’t already clear enough, people unfortunate enough to be the receiving end of his kicks have seriously likened them to being hit by a car and it’s known that very few people would ever dare spar with him because his jawbone-obliterating haymakers would crush the steel lined safety helmets you were required to wear when sparring. And yet Bruce Lee still tried to trick people into letting him kick them even though he knew that doing so was at the very least, setting them up to be knocked to the ground like they’d been hit by a foot-sized truck driving straight into their kidneys and at worst, be thrown backwards with enough force to break someone else’s arm. That’s not hyperbole or even superbole by the way, Bruce Lee really did once kick someone so fucking hard in the ribs on the set of Enter the Dragon that the guy flew backwards and broke the arm of the guy standing behind him.

One of Bruce’s other  favourite pranks was to invite friends, neighbours and presumably girl scouts selling cookies, into his garage to see his custom-made heavy bag. This heavy bag was, as noted above, filled with metal shavings and crushed t-rex skulls instead of sand or beans like regular heavy bags, making it weight twice as much as a regular heavy bag which was necessary for Bruce who was known to be able to kick smaller heavy bags into the ceiling, which we’re guessing his wife didn’t like.

Bruce would then punch or kick this heavy bag as hard as he could before asking his guest to do the same so that he could observe their technique, knowing full well he was basically inviting them to punch what was essentially equivalent to a brick wall. When the guests inevitably crippled themselves by trying to punch something designed to survive blows from Bruce God-Damn Lee, Lee would reportedly then let out a “hearty laugh”. Because apparently nothing is funnier than watching someone break their fingers trying to show off how tough they are.

Actually, come to think of it, that does sound pretty funny.