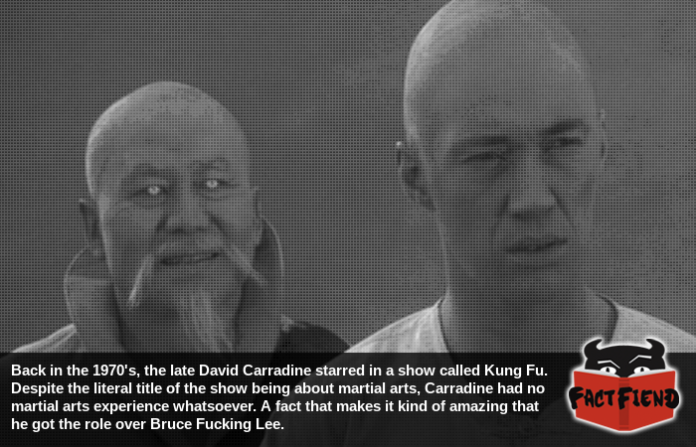 If there’s one thing everyone knows about Bruce Lee, it’s that he was pretty good at martial arts. A fact that would make you assume he would have been a shoo-in for any role he auditioned for requiring the ability to punch a man’s head off. As it so happens, that wasn’t really the case given the famed martial artist once lost out on a role requiring that exact skill set, to a dancer.

Specifically we’re talking about the show Kung Fu which aired in the early 1970’s and starred David Carradine as Kwai Chang Caine. A half Chinese, half American master of Shaolin punch fu and protector of the people. The thing is, Carradine was neither Asian or a martial artist, the former being something he seemingly tried to hide by squinting a little in promo stills for the show.

In regards to martial arts experience, while Carradine did eventually learn several Chinese martial arts (specifically, Tai qi and Qi Gong), when he was cast as Kwai Chang (the greatest kung fu master to have ever lived according to the canon of the show) he had literally no experience in them whatsoever. He did however have some experience as a dancer, which was apparently good enough. 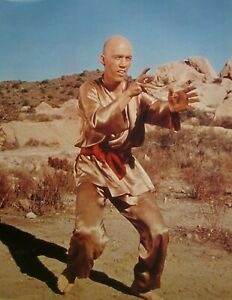 A solution then was found in the form of the show’s choreographer, David Chow, an actual martial artist who used his experience to cover for, well, Carradine’s lack of it. To Carradine’s credit he did eventually develop an interest in martial arts while filming the show so by it’s third season, he was reportedly able to do all of his own stunts. However, it doesn’t change the fact that for the first season of a show called Kung Fucking Fu, Carradine’s didn’t know any kung fu.

Here’s where the story gets kind of stupid though because none of this would have been necessary if the producers had gone with their first choice for the role. Bruce Lee. Exactly why Lee didn’t get the role isn’t really clear and it’s hard not to assume Hollywood whitewashing is to blame when you consider that the role sounded like it was written for Bruce Lee. Which as it turns out, it very well might of been because Lee actually wrote a script for a show with almost the exact same premise as Kung Fu that he reportedly pitched to numerous studios who all turned it down because they didn’t think Lee, an Asian man, could carry an entire TV show on his own.

Now while it has long been rumoured that studios stole the idea for the show from Lee, it has never bee conclusively proven. What we do know for sure though is that Carradine was aware of the fact he was cast instead of Lee and was kind of a dick about it. Telling an interviewer in 1993 that he believed that he was cast instead of Lee because he exuded an aura of “brooding quiet power” that Lee didn’t. 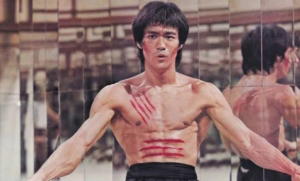 Which, yeah, makes complete sense and is absolutely something we believe without reservation.