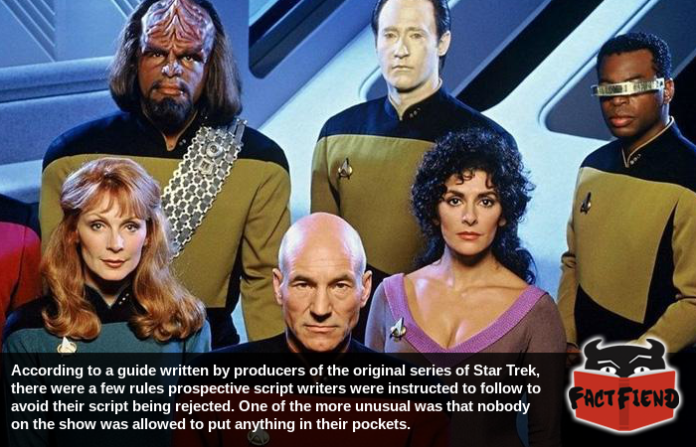 At its core, Star Trek is an optimistic look at the future, an idealistic view of what humanity could achieve if it got its shit together. An important facet of which, at least according to producers of the original show, is that nobody in the future will need pockets.

Now it’s important to note that while there are a few exceptions to the seemingly arbitrary rule of nobody in the future needing pockets, most notably Star Trek: Enterprise, no character on any show wears an outfit featuring pockets. In fact the “no pockets” rule is so ingrained in Star Trek canon that outfits featuring pockets are practically a novelty to such an extent them appearing on one-shot characters who never appear in the show again is something fans have noticed and catalogued. Like this guy from an episode of TNG.

A fact that probably has you wondering? Well, why doesn’t anyone have any pockets? To which there is sadly, not singular or all that satisfactory an answer. However, from what we have gleaned from interviews with people working on the show, the idea is that form-fitting, sleek outfits just look more futuristic.

An idea producers were so keen on maintaining in the original series that things like phasers or tools would be attached to costumes by hidden patches of Velcro. An admittedly low-fi effect that nonetheless provided the illusion that the items were being held in place by some sophisticated technological means and not a strip of fuzzy fabric. 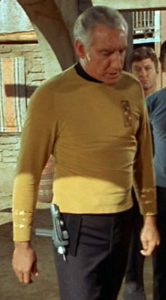 In later series the Velcro effect was dropped and replaced a slightly more advanced system, by which we mean a hidden belt consisting of the same fabric as the costumes. However, the intended effect is the same, to maintain the illusion that the outfit is a singular, form-fitting piece of fabric of futuristic design. 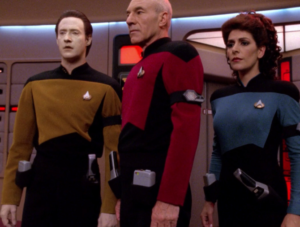 As an aside, because this is kind of hilarious, those outfits pictured above were made of Spandex and were, in addition to being incredibly uncomfortable, smelled like ass almost constantly. Which was apparently super annoying for the cast.

Both of these effects are in line with directions given in the Star Trek Writer’s Guide, which tells hopeful writers for the show that you should never show anybody putting anything in their pocket. Noting that “When equipment is needed, it is attached to special belts” though no reason for this particular direction is given, it’s likely for the same reasons as those listed above.

This said, another theory about the lack of pockets in the Star Trek universe is that it’s symbolic of how far humanity has progressed. To explain, the canon of Star Trek has repeatedly established that humanity no longer has a need for things like money and petty human squabbles are a thing of the past, as such, there is likewise no need for pockets. Or at least that’s how the theory goes because it’s also just as likely that pockets aren’t needed in a future where a hyper-intelligent computer can conjure whatever you want, for free, from thin air. Which is also pretty dope.