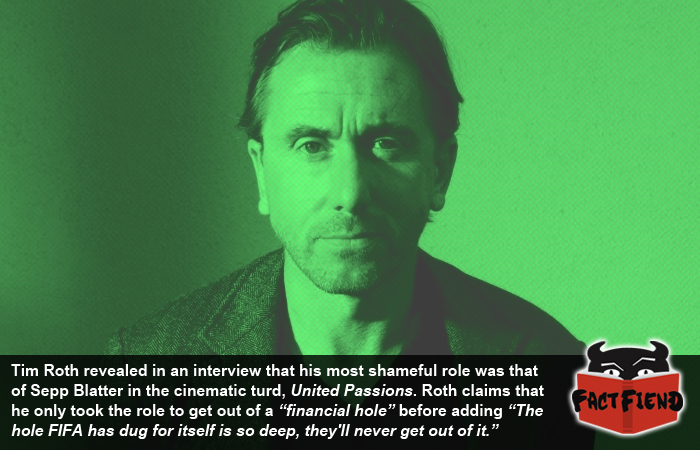 United Passions, a film about the history of the notoriously corrupt uber-powerful entity known as FIFA, has variously been described as “the most embarrassing film imaginable” (The Guardian) and a “total crock of festering horse shit” (us, right now). Well for anyone who needed another reason to think this movie sucks, Tim Roth also considers it to be the worst movie he’s ever been in.

If you’ve never seen United Passions, which isn’t surprising considering this movie grossed less than a thousand dollars on its opening weekend, it’s essentially a film dramatising the history of FIFA and its executives. By which we mean, it’s an ego massaging masturbatory aid for FIFA executives masquerading as a film. The film couldn’t be a more transparent attempt to convince people FIFA isn’t a massively corrupt organisation run by oily, dickless snakes if it was exclusively bundled with that phone Tony Stark uses in Age of Ultron.

The film is so embarrassingly pro-FIFA that copies of Pro Evolution Soccer burst into flames when you put them near the DVD and is so willfully ignorant of hard facts that the Texas Association of School Boards is listed in the special thanks section of the credits.

Perhaps the saddest part about the film, other than the fact it tried to paint men who are complicit in corruption, bribery and making John Oliver angry, is that they somehow managed to rope actors like Sam Neil and Timothy Roth into helping them make it. While we can’t say why the man who made everyone realise how rad dinosaurs are agreed to star in this piece of shit, we do know how they managed to make Tim Roth appear in this abomination. They gave him a fuck-ton of money.

According to one of the few interviews Roth gave about this movie, in which he stars as Sepp Blatter, a man so obviously full of bullshit his suits are made of recycled fertilizer bags, Roth is deeply ashamed of his role in the film, explaining that it would make his father roll in his grave.

When asked about why the hell he took the role in the first place, Roth was remarkably candid, bluntly explaining that he took the job for the fat FIFA pay-check and nothing more. Adding that the millions FIFA paid him to appear in the movie helped him climb out of a financial hole which his father was presumably break dancing at the bottom of.

However, it wasn’t all bad though because hilariously this film made almost no money while simulataneously costing over 20 million to make (80% of which was funded by FIFA), meaning technically, all Tim Roth really did was take million of dollars away from some assholes.

To read about one of Tim Roth’s less embarassing roles, why not read our article about why Abomination had no ears in the Incredible Hulk movie.