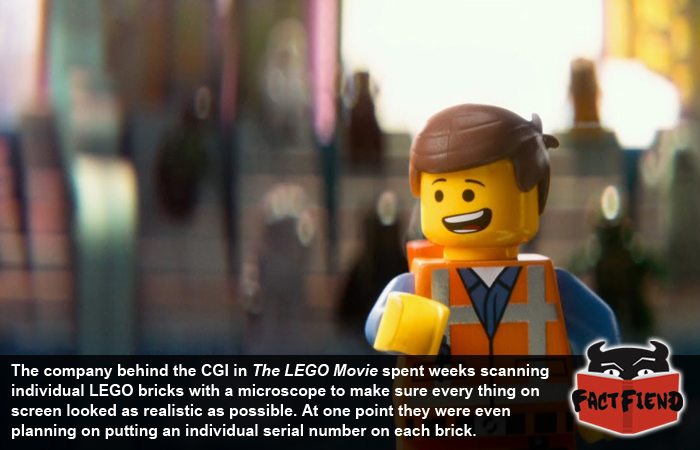 If you haven’t seen The LEGO Movie and are somehow able to live without the theme song in your life, you may want to go read about Batman’s favourite chili while we gush over it for a few minutes, for everyone else, did you know they scanned actual LEGO bricks to make everything on screen look just right?

According to the company behind the CGI, Animal Logic, with the exception of the short live-action sequence towards the end of the movie, every thing else you see was accomplished entirely with CGI. Which may not sound like something you’d think a company would brag about until you realise that when the trailer for the movie dropped in 2013, arguments erupted across the web about whether or not it was stop motion. In other words, the CGI in this movie is so seamlessly realistic that some people literally can’t distinguish it from the real deal, which isn’t surprising considering the effort Animal Logic went to to make the LEGO in the movie look just like the stuff you’d find hiding in your hallway at two in the morning.

As noted above, actual LEGO bricks were scanned with a frickin’ microscope to make sure every blemish, mark and speck of dirt was captured and put into the final product. Seriously, look at this next screenshot and tell us that it doesn’t look like the most depressing LEGO playset in history.

Now think about the fact that everything in that image was created on a computer and try not to think too hard about how difficult it must have been to put gigantic LEGO structures together without instructions, using a computer while simultaneously resisting the urge to building a giant LEGO dong.

According to an interview with some of the folks over at Animal Logic, they also spent hundreds of hours watching stop motion footage to figure out what made it so visually distinct and as a direct result of this research, they opted to include no motion blur in the movie whatsoever so the animations and movements on-screen looked jerky and realistic. It’s also the reason screenshots from this movie look fucking amazing.

As an example of the amount of effort Animal Logic were willing to go to, to make this movie look as much like a multi-million dollar YouTube video as possible, they were originally planning on somehow putting a unique serial number on every LEGO brick that appeared on screen. Fortunately for the people who had to render this movie, they ultimately decided against it, because even pedantic assholes like us wouldn’t have noticed something that ridiculous.

But, just for a second realise that the people who made the LEGO movie were genuinely debating at one point whether or not they needed to put a tiny serial number onto every single LEGO brick just so that assholes like us would argue about whether or not it was stop motion footage or not.

For an article about a movie that apparently nobody is putting any effort in to making, why not read about how we’ll probably never see an American version of Battle Royale because studios are worried people would think it’s a rip-off of The Hunger Games.