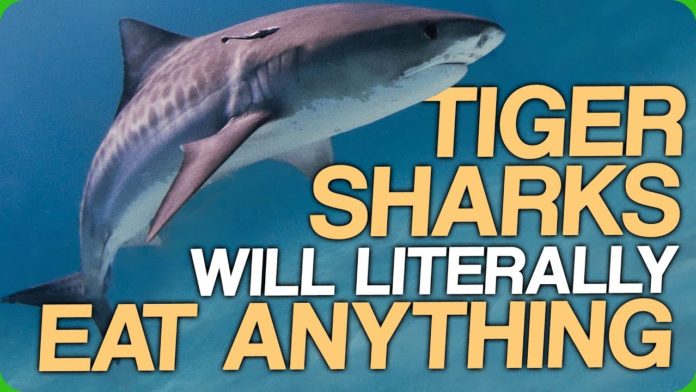 It’s often said that sharks have an unfair reputation as giant murder-fish, when in reality they very rarely attack humans, mostly being content to bob around occasionally slapping us with their tails. While sharks almost never eat humans, apparently they will eat fucking everything else though, as tiger sharks are only too happy to prove.

First of all, shark experts have noted that there is almost no creature in the sea that a tiger shark won’t try to eat up to and including other, lesser tiger sharks. As apex predators, which basically means that there’s nothing in the ocean with the balls or ability to kill them, size is of no concern to a tiger shark and they’ve been known to prey on giant armor-plated turtles, dolphins and even whales when the mood strikes. As if that wasn’t enough, tiger sharks will also happily chow down on small fish, sea birds, crabs, jellyfish, sea snakes, in short if it’s in the ocean, a tiger shark won’t hesitate to take a bite out of it while swimming in circles and shitting everywhere just to insult nature. 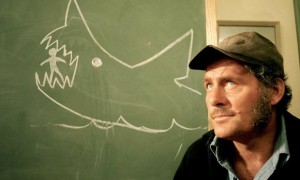 What makes tiger sharks truly scary though is that they’ve been known to eat creatures that live exclusively on land and nobody is really sure how the fuck they pull it off. For example, one tiger shark specimen was found with an entire chicken coop complete with feathers in its stomach whilst another found with a decapitated horse head sitting in its lower intestine and no one was able to offer a reasonable explanation to how in the hell a shark had managed to come across the top half of a horse or a cage filled with chickens in the middle of the ocean.

But here’s where things get really weird because tiger sharks are so indiscriminate in their feeding habits that they will hoover up almost fucking anything people drop into the ocean. Along with the usual clichés like tires, license plates, shoes and fat kids on rafts, some of the more unusual objects to be found in a tiger shark’s colon include a full suit of armor, a small crocodile, a grenade, a bike tire, antlers, a sack of coal, a giant tin of peas, someone’s pet cat and some random assholes wallet with no money in it, suggesting that the shark either robbed him, or spent the money and was trying to hide the evidence.

We really hope someone from Hollywood is researching this so that on the off chance they decide to reboot Jaws, we can have all of the thing we’ve listed here fall out of the same shark’s stomach at once.