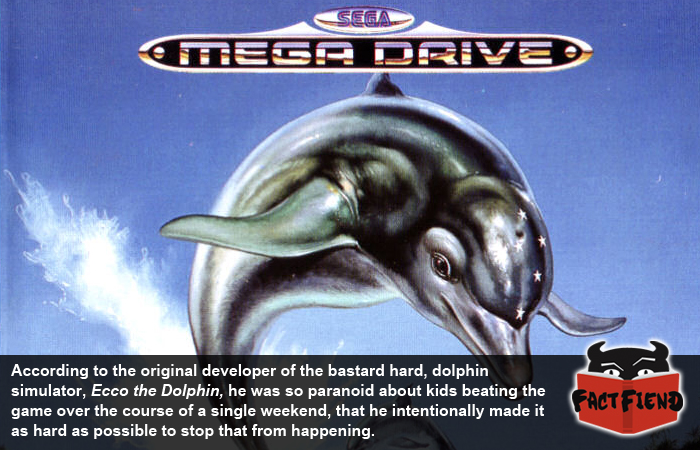 If you played any sort of Sega game system as a child there’s a fairly decent chance that you also at one point played Ecco the Dolphin, a game in which you play as a dolphin who saves the world from aliens. The game is best remembered for being really fucking hard, meaning only a handful of kids kids ever got far enough into the game to realise it also involves flying through time and headbutting aliens in the dick.

The game’s punishing, almost unfair learning curve that no doubt caused more childhood tantrums than defective McDonald’s Happy Meal toys, was almost entirely thanks to the input of the game’s designer, Ed Annunziata. According to Ed, he went out of his way to make the game as bastard hard as possible so that it would be impossible for a child to complete over the course of a single weekend. Going back to levels he felt were too easy (read: not filled with enough bullshit) to cram in more puzzles and the occasional giant sea horses.

However, after the game was released and the reviews began pouring in, Ed realised that he’d perhaps gone a little too far and the game became infamous for being that weird dolphin game nobody except your cousin could figure out how to play. If you think we’re just being facetious or bitter because we could never figure out how to make Ecco do backflips, you’re right, but in 2013, in an interview with fans of the game, Ed issued a formal apology for the game’s difficulty and noted that he’d probably made some aspects of the game a little too challenging for young children, Sega’s main audience at the time.

All that said, the game’s difficulty did end up working out in the game’s favour when Ed sent a copy of the game to the Royal British Marine Life Conservation Society. You see, Ed figured that the society would take issue with a game in which it’s possible to dolphin combo various aquatic life to death and that Sega would be able to use that controversy to market the game. However, the controversy never came because nobody at the society could get past the first level, which basically consists of swimming around and talking to other dolphins. As a result, they simply assumed the rest of the game must have been similarly peaceful and tranquil and gave the game their blessing without bothering to progress any further and see the Lovecraftian horrors hiding in the game’s later levels.

Hell, they were so impressed with the first level they even sent Ed an invitation to join them.

If you want to read about an attempt to illicit controversy for a game that also fell flat on its face, why not read about how Custer’s Revenge, a game about raping a native American woman, was previewed to a Women’s rights group.