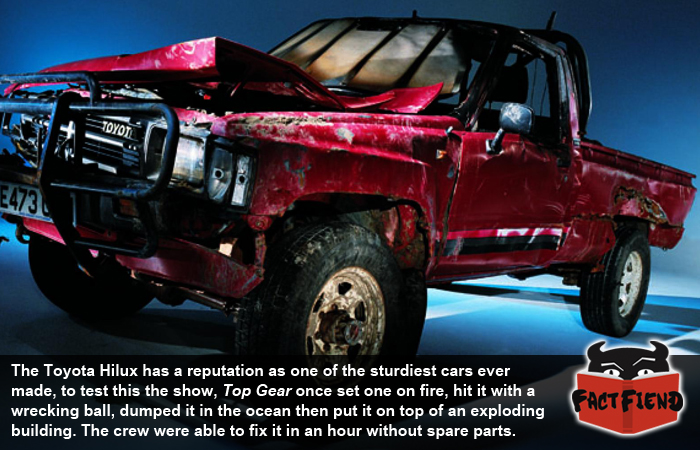 Despite the fact many of them are made of steel, hardened plastic and old Soviet tanks, cars are , like human beings, surprisingly fragile things that can be felled by something as simple as a potato provide you know exactly where to put it. The Toyota Hilux on the other hand is pretty much indestructible, so much so, that it’s the go-to car for ISIS. No, really.

Due to a combination of its rugged simplistic design and exceptional build quality, Toyota Hilux trucks have a reputation amongst car aficionados and militant forces as being nigh-indestructible to the point they’ve been referred to as “the vehicular equivalent of the AK-47” a gun that, as we’ve discussed before, can survive being run over by a fucking tank.

Over the years the British motoring entertainment show, Top Gear, has arguably done more than anyone to test this not unimpressive claim, subjecting a host of Hilux trucks, old and new, to a baffling array of punishment and abuse in the name of science. For example, as noted in the macro above, in the third season of the show, the hosts took a decade old Hilux with over a hundred thousand miles on its odometer and large visible rust holes in its bodywork and spent two entire episodes beating the shit out of it to no effect.

The car survived being set ablaze, being washed out to sea and fully submerged in salt-water for over four hours, hit with a wrecking ball and finally being placed atop a 24o foot tall exploding building. Each and every time the truck either came out unscathed or the crew were able to repair it (without spare parts) using a standard issue repair box containing nothing more than a screwdriver, a wrench and some Duct Tape. The hosts were so impressed with the truck’s seeming inability to die and Jason Voorhees levels of endurance that they mounted it to a metal plate and used attached to a wall in the studio so that it could watch and judge every other car featured on the show.

The little truck made such an impression on the hosts that 4 seasons later in 2007 when they were tasked with driving to the magnetic North Pole, they chose to do it in a modified 2005 model of the truck and broke a fucking world record. The following year, one of the hosts took the Hilux the camera crew had used during their trip to the North Pole, strapped a piece of metal to it’s front end, slapped on some new tires and then drove it to the top of a currently fucking erupting volcano, snatched a piece of the Earth’s molten core from its gaping maw and just drove back.

With this in mind, it’s probably not surprising that the Hilux is very popular with militant insurgents who love these things for many of the reasons discussed above, mainly that they’re easy to fix, difficult to kill and really badass looking. In fact, fucking ISIS have so many Hilux’s at their disposal that U.S. counter-terror officials once formally asked the CEO of Toyota, “what the hell? when they noticed that almost every insurgent they encountered was driving one.

Toyota responded that they had no idea how so many of their trucks ended up in the hands of the most vilified terrorist organisation on Earth and reiterated that it was against their company’s ethos not to sell kick-ass trucks to individuals who might alter them for paramilitary use, especially if they were in ISIS, a quote we’re sure Toyota’s stockholders just loved reading. Especially when it appeared right next to another one from a former Ambassador to the United Nations saying “the Toyota Land Cruiser and Hilux have effectively become almost part of the ISIS brand“. And we thought Apple were having a bad year.