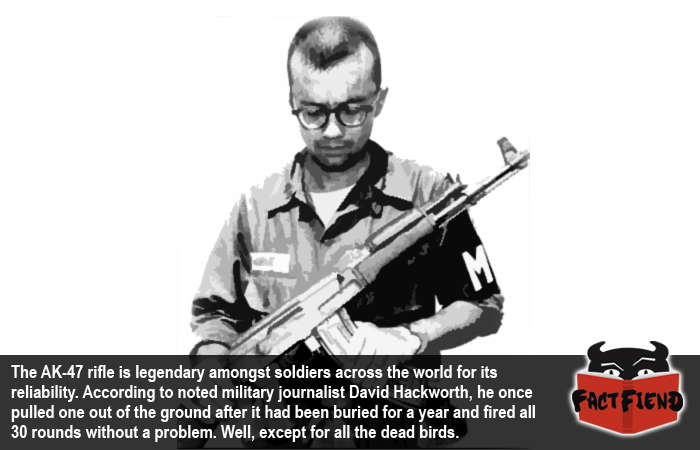 The AK-47 assault rifle is easily one of the most iconic and best known modern weapons on the face of the Earth, this is almost certainly due, in part, to the legendary reliability of the weapon. We’re not kidding, you can literally run this thing over with a tank.

If you think any part of that previous sentence was hyperbole, it wasn’t, when Mikhail Kalashnikov designed the weapon he did so with one thought in mind, it had to be simple enough to be used by a conscript with little to no military training and reliable enough so that, that same conscript could maintain it.

Because the gun was originally designed with freezing Russian winters in mind, it is specifically designed to be operated, repaired and maintained by a person wearing big-ass winter gloves. This led to the gun being designed and built with almost no moving parts save for the ones that were absolutely necessary to the guns functionality, which means it will work almost anywhere.

We’re not taking the piss with that image caption by the way, an Ak-47 isn’t just able to fire underwater, but according to the experts it actually works better. But the AK-47 isn’t just at home in the deep blue sea, it will also fire when it’s full of sand, buried in mud and even after being hit by a car. In fact, there’s even a reliable source discussing a Chinese knock-off AK-47 that worked after 18 years of being buried in a ditch. You just can’t compete with reliability like that.

We’re still not kidding, during the Vietnam war it wasn’t uncommon for American soldiers to straight up throw their brand new standard issue M16s away to pick up a shitty, dirt-covered AK-47 because they knew it was way less likely to jam. To put it in terms of numbers, an M16 was literally twice as likely to jam as even the most Frankenstein-esque, cobbled together AK-47 you’d just pulled out of the ground.

Man, when the Russian’s put their mind to something, they go all out.