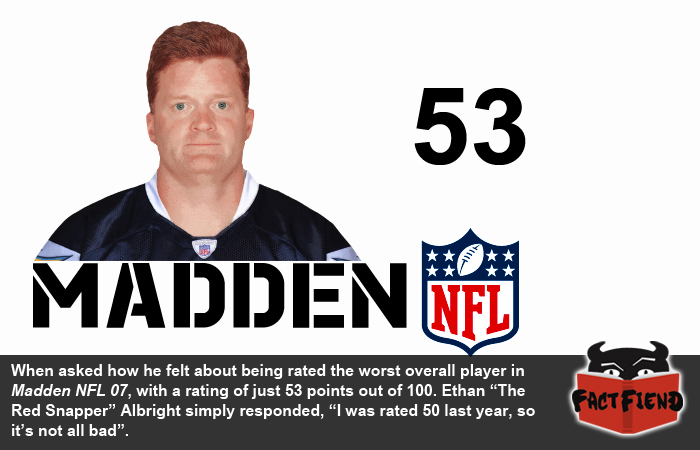 Given that we’re a website that has occasionally been linked to on Reddit, we’re fairly used to being told that we suck various amounts of dick by strangers online, which, isn’t pleasant. Which is why our heart goes out to Ethan Albright, an NFL player who, in 2008 found out that he was objectively ranked as the single worst player in that year’s Madden game, or it would if Albright wasn’t so unbelievably god-damn chill about the whole thing.

As noted above, Albright’s overall ranking in the game was 53 out of 100, making him the the worst player in the entire game by a huge margin. As an additional cock-clap to the face, Albright’s ranking was so low that is character didn’t even outrank or outperform randomly generated, shit-tier rookies, which must have stung for a then 12 year veteran of the sport, right?

Well, not exactly. According to Albright himself, he didn’t really care about his ranking because to quote him “it’s just a video game”, which is remarkable because it made him pretty much the only player in the NFL that year who didn’t bitch about his overall ranking and he was the worst player in the entire game. As noted in this article, individual player rankings are one of the single most commonly complained about aspects of the Madden franchise from NFL players, who reportedly badger the shit out of people who have nothing to do with how the rankings are decided just to whine that they think their rating should be higher.

We’re not kidding, there are representatives from EA Sports (the company who produce the series) who have noted that players will seek them out at promotional events just to try and argue that they should have a higher ranking in the game. In one particularly hilarious case, an EA rep called Sandy Sandoval was complained at for several hours by the now retired Byron Leftwich who couldn’t fathom how someone was faster than him, seemingly oblivious to the fact that asking the same question 50 times in a row is a sure-fire way to have them assume you’re a little slow in at least one regard.

But here’s the kicker, according to the guy actually in charge of the way the game’s stats are decided, Donny Moore, Albright wasn’t technically the worst player in the game, it’s just that his playing position of Long Snapper, wasn’t in the fucking game. Meaning his stats were crippled since the thing he excelled at, wasn’t a factor the game took into account. Something the developers were apparently aware when they assigned Albright’s stats because his character just so happens to have  a singular perfect stat, team morale. That’s right, the developers felt so bad for this guy that they gave him a perfect score in the “tries really hard” category.

And even then, he was still fairly pleased to learn that his overall stats had risen three points from the previous year. 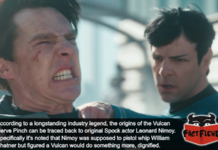