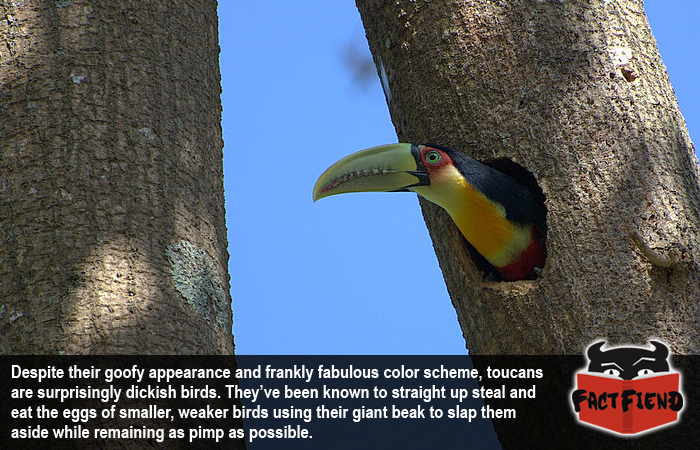 It’s impossible to not feel happy while looking at a toucan, they own a beak twice the length of their own body that they will sometimes use to adorably eat a single seed, then again, sometimes they also use it to bully and beat the shit out of other birds.

It’s often said that Darwin first began thinking there was something to the theory of evolution when he studied the differing beaks of the finches living on the Galápagos Islands. Darwin noticed that finches beaks varied and often complimented their diet, for example, birds who primarily ate seeds often had short, stout beaks capable of breaking though the toughest seed shell whereas the birds who ate insects had pointier beaks better suited to gripping smaller objects than wolfing down entire walnuts.

When Darwin saw a toucan though his mind went blank because how could evolution possibly explain a beak that fabulous? Darwin’s best guess was that the beak was designed to attract a mate and that the males with the biggest and flashiest beak penis were the ones who got the most female toucan ass.

You’d think given how iconic they are we’d know by know what the function of the toucan’s beak is, but even today, their is still no universally agreed upon theory about exactly why toucans look the way they do, though the best guess is that it somehow helps the bird stay cool.

We however, have a different theory, you see, though it’s almost never mentioned in science books or even in George Of The Jungle, toucans will use their giant-ass beak to straight up slap the shit out of smaller birds and eat their eggs. For example, the brilliantly named Chestnut-mandibled Toucan has been observed in the wild shoving its unwieldy beak straight into the nest of a woodpecker like half its size just to eat its eggs. Often the sheer size of a toucan’s beak means it can happily slap another bird around without exposing itself to harm and even use it to slyly steal or break an egg from an impressive distance away.

At this point we’d be tempted to say that toucan’s specifically evolved this way on purpose knowing full well that humans would find them too cuddly and wuddly to ever think that they’d be capable of eating the unborn young of another bird! If it wasn’t for the fact we can’t stop imagining a toucan using its beak to slap the shit out of another bird.