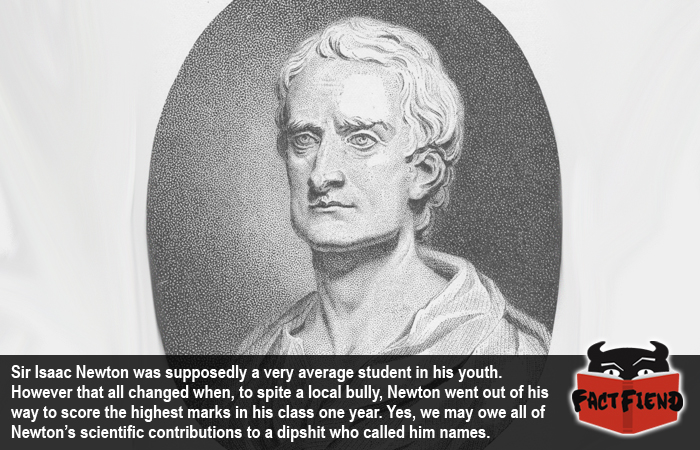 Sir Isaac Newton is the entire reason you can read this paragraph without floating off at random thanks to the blood oath he signed with the gravity Gods many years ago in return for him not trying to mate with their women. He’s by far one of the best known, most well respected and baddest ass thinkers of the last few hundred years and we may owe all of his scientific achievements to the kid who used to bully him in school.

You see, when Newton first started his studies at The King’s School in Grantham, England, he was, for all intents and purposes a decidedly average student. We’re not saying that the young Newton was stupid, or even that he couldn’t have ripped open a wormhole through sheer force of will, we’re just saying that his grades didn’t exactly reflect the reputation of his adult self in the way you’d expect.

Now it’s recorded that along with being a fairly average student, Newton was also a very lonely young boy who suffered at the hand of a local bully. Along with being an asshole of the highest degree, this local bully was also noted to be the student with the highest grades in Newton’s school, because just being bigger and stronger than all of the other kids apparently just wasn’t enough for this enterprising young dipshit.

Though we’ll probably never know for sure the identity of this bully, it’s almost certain that it was some asshole kid called Arthur Storer, a young man, that according to Newton’s own biography, used to taunt and pick on him on an almost daily basis. Storer soon stopped picking on Newton though when he kicked him in the stomach and instead of seeing him fold into a sniffling ball of prepubescent anguish, he was instead grabbed by the ears Newton and smashed nose-first into a brick wall.

It’s recorded that after this extremely awesome encounter, Newton had an epiphany of sorts and he realised that if he could beat 8 shades of shit out of his bully physically, he could also probably do the same with his mind. So, following his school-yard throw-down, Newton hit the books as hard as he’d hit his bully’s face, eventually snatching the much sought after title of “kid with the highest grades” away from him. Which we guess it a great lesson for anyone reading this who may be being bullied, work hard to surpass your bully’s achievements to consign them to a life of mediocrity, thereby winning at life over all, failing that, just smash their fucking face into a wall.

Now one of the curious things about Newton’s early education is that it involved virtually no mathematics tutoring, however what it did involve though was a metric shit-ton of Latin. So why is that important you ask? Well almost every academic of Newton’s day communicated exclusively in Latin, in other words, Newton’s solid grasp of the language at such an early age was no doubt instrumental in his later contributions to science and math. Meaning, Newton’s desire to best his bully and make him truly inadequate in all areas of his life probably played a small, but crucial role in his later academic work.