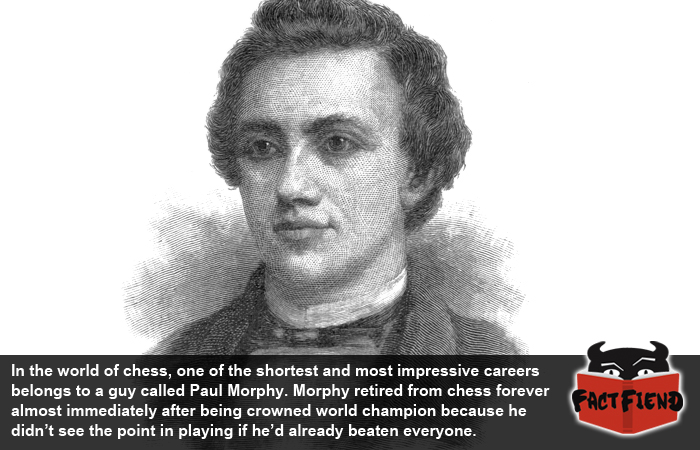 Chess is often called the sport of kings, which is probably why its top ranks seem to be populated by such huge shitheads. Arguably one of the biggest, but most loveable shitheads of them all was Paul Morphy, the chess master who immediately quit upon being crowned champion of the entire world just so that nobody could ever challenge him again.

Like many chess grandmasters, Morphy first discovered his affinity for the game at an incredibly young age, supposedly teaching himself how to play simply by watching and observing others. According to legend, Morphy’s skill at the game was first noted when he interrupted a game between his dad and uncle to chastise his uncle for missing an obvious chance to win before angrily repositioning all the pieces to demonstrate what he meant when he was only 6 years old. After that day, Morphy’s family decided to cultivate his obvious talent by making him play the game against every person with any discernible skill at the game they could find and presumably by making him only move diagonally throughout puberty. A few years later after years of cutting his teeth against players 3 times his size and age, Morphy was reportedly beating self-professed experts at the game in half an hour, in one case he beat a guy called General Winfield Scott so badly that that the General quit just 6 moves into their second game and swore to never play Morphy again.

In another case, Morphy beat Hungarian master Johann Löwenthal three games in a row when he was just 12 years old after Löwenthal playfully agreed to play him as a joke. Throughout their matches, Löwenthal became increasingly flustered to the point his eyebrows nearly exploded off his face every time Morphy made a move that backed him into a corner. After an ego-withering, testical crushing loss at the hands of a small child, Löwenthal blamed his loss on the hot weather and not the overwhelming skill of his clearly superior opponent.

By the time Morphy had turned 22, he’d pretty much beaten every notable chess player in the world and after touring Europe and soundly whupping every person he encountered there, he returned to America and announced his retirement from the world of competitive chess, an announcement that didn’t sit well with the chess playing world who had Morphy pegged as one of the most naturally gifted players alive at the time. Over the next few years, wherever Morphy went he was besieged with offers to play chess from experts, all of which he turned down because he was rich as fuck and he didn’t really need the money he stood to earn from winning.

When money couldn’t tempt Morphy, people variously tried guilt tripping and even threatening the young master into playing against them, neither of which worked because again, Morphy was rich enough to not have to give one ounce of a shit about stuff like that. Eventually Morphy got so frustrated with being sent endless letters and having chess fanatics stop him in the street to discuss the game, that he openly refused to ever take the game seriously on the rare occasions he could be coaxed into playing a friendly game. Along with refusing to play with a full set of pieces, thus robbing any opponent he played of the chance to ever say they’d beaten him legitimately, Morphy would sometimes play the game and win while blindfolded or with his back turned to the board, purely to show opponents why he no longer felt he needed to prove himself at the game. Hell sometimes, Morphy would walk into a chess hall, sit down for hours drinking tea and then leave without playing just to annoy the people there who kept pestering him to play. If you’re wondering why Morphy went out of his way to be this much of a dick, it may have something to do with the fact that after he retired from chess, he tried to start a law practise, but was forced to close up shop after a few months because literally every person who came into his office tried to talk to him about chess. As you can imagine, having virtually everyone he ever tried to hold a conversation with try to steer him towards talking about a subject he no longer had any interest in, made Morphy kind of resent the game after a while and as a result, he eventually began intentionally pissing chess players off by refusing to take the game seriously.

All in all it’s believed that after his wholly unexpected announcement to retire forever from the game he mastered, Morphy played only a handful of games over the next few decades and he spent pretty much the rest of his life doing nothing.