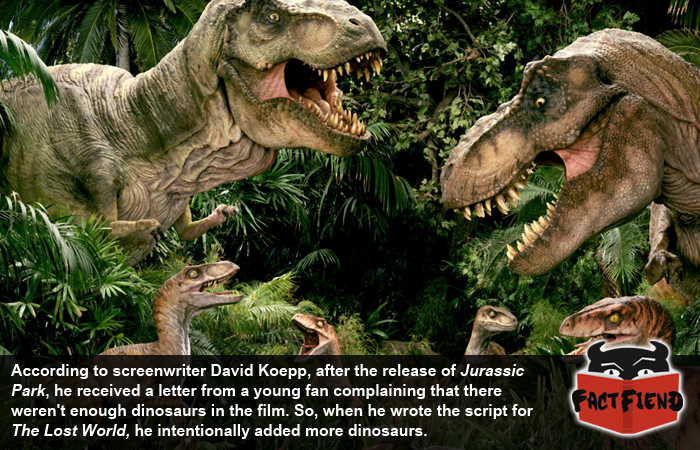 Depending on who you ask, The Lost World: Jurassic Park is either a big pile of crap or a really big pile of crap. Though the film was released to decidedly average and lukewarm reviews, it is generally regarded as being a bad movie because it dared to commit the heinous offence of not being as good as one of the best movies of all time. That said, the movie sure as shit featured a lot of dinosaurs, which must have pleased that dumbass kid who wrote in to complain about the lack of dinosaurs in the first movie.

To explain, shortly after the release of the Jurassic Park, David Koepp, the screenwriter responsible for the script received a curt letter from a rather annoyed young fan who we’re going to call, David, because that’s the sort of name a dickhead would have. According to this little know-it-all, while the film itself was “nice” he felt that Koepp’s script had spent too long to, you know, getting to the dinosaurs.

The kid also criticised a film with a 93% rating on Rotten Tomatoes by saying that every single thing in the film prior to the introduction of the dinosaurs was “boring” and that he (meaning Koepp) should have just skipped it all in his script. Amazingly, Koepp not only kept this letter (which literally consisted of a single line saying the movie sucked and it needed more dinosaurs) but stuck it to his computer while he was writing the script for the sequel, The Lost World: Jurassic Park.

According to Koepp, he actually added more dinosaurs to the films script as a direct result of this letter, making sure that the film featured both a more diverse range of dinos as well as more situations in which humans and dinosaurs interacted. Which probably explains why there’s a 10 minute scene in the film dedicated to two people manhandling and rubbing their hands all over a baby T-Rex.

So yeah, The Lost World: Jurassic Park may have been a crappy, bloated turd of movie that ultimately hurt the franchise and the medium film itself by setting a precedent that unnecessary sequels could still make tons of money, but at least that dipshit kid who decided to track down Koepp’s address and write him a letter saying his movie suck got to see his fucking dinosaurs.