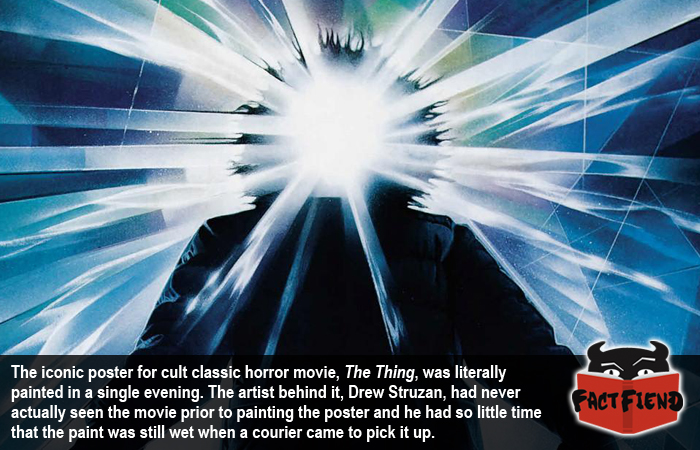 The poster for The Thing is regarded by movie buffs, horror fans and parka aficionados as one of the most striking and visually impressive ever released. Which is impressive when you realise that the guy who painted it had no idea what the movie was about and that he painted it in a single evening.

The guy in question is legendary poster artist, Drew Struzan, the man responsible for practically every awesome movie poster in history, including, but not limited to:

Police Academy 3: Back in Training

Before you write off that last one as a shitty movie, you’re totally right, Police Academy 3: Back in Training did suck more ass than a vampire bat on a donkey farm, but boy did it have a fucking awesome poster. 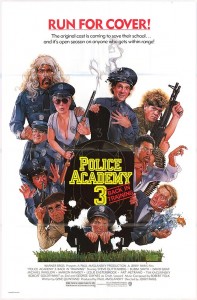 Struzan is famous for his ability to create paintings in a very short period of time and it’s noted that he could condense the entire creative process for a poster down into a couple of week. However, even Struzan’s impressive ability to fart out content almost instantly was challenged when he was called up out of the blue and told by a worried executive “we have this movie coming out, we don’t have a poster for it, we need something we can print tomorrow.” The movie the executive was talking about, as you’ve probably guessed by now, was The Thing.

Curious, Struzan asked the executive what this movie was about, to which they responded, “Have you seen Thing From Another World? This is pretty much the same. “ That was literally the only direction Struzan was given about how to approach the poster. Unphased by a niggling detail like having no idea what the film was about, Struzan put on a selection of his finest winter clothes and had his wife take a picture of him, from which he created the the poster we all know and love today in a matter of mere hours. Meaning that Struzan didn’t just create one of the most enduring posters in cinema history, he’s also the person featured in it.

Struzan reportedly worked the entire night to finish the poster and as we already mentioned, when a courier eventually came to pick it up the paint was still wet. Struzan reasoned that by the time the painting reached its destination, which was well over 100 miles away, the paint would have dried enough for the company bigwigs to make their copies. Of course the painting could have just as easily gotten smudged and ruined forever, but Drew Struzan was a guy who lived on the edge and/or didn’t give one iota e of mouse turd if the movie’s precious poster was ruined after he’d spent all night working on it.

We honestly don’t know enough about him to make that call.