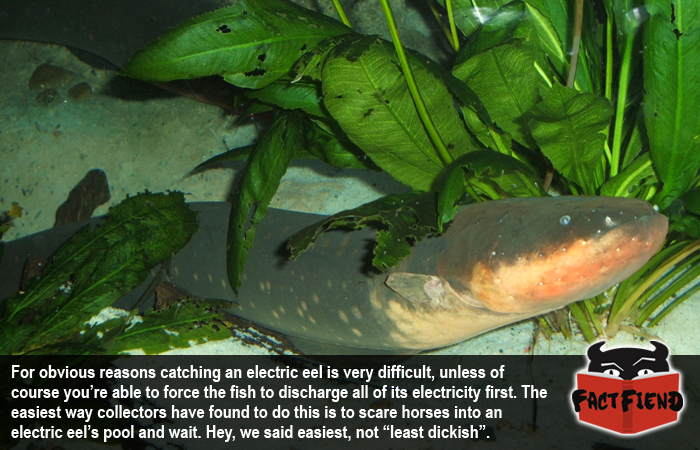 Despite having the word “eel” right there in its name, the electric eel is, according to Wikipedia and scientists, technically classified as being a knife fish, which is interesting we’ll admit, but nowhere near as interesting as the way fish collectors catch these things. Before you press to read more, we’ll give you a clue, it requires horses and the ability to not care about how much of an asshole you’re going to look in 30 seconds time.

As you’d probably expect, electric eels are very popular amongst fish collectors, moat owners and electricity themed supervillains, however, due to their habit of zapping the balls off of anything that comes within 18 feet of them, electric eels are notoriously difficult to catch. When you also consider that electric eels are virtually always found underneath several feet of murky, electricity conducting water, it becomes clear that it’d probably be easier to catch a shark wearing a bulletproof vest and night vision goggles than it would be to somehow get your hands on an electric eel.

That said, fancy aquarium owners are anything but determined and hunters and people on the payroll of people who really want to own a fish that could kill their neighbours have come up with an ingenious, albeit massively dickish way of catching them.

You see, the only real way to reliably avoid being shocked by an electric eel is to make sure it has already used up all of its available stores of nutsack sizzling bioelectricity. When temporarily robbed of its signature defence mechanism, catching an electric eel becomes a decidedly simpler affair and they can, for the most part, be harmlessly scooped up by hand or slapped around a little bit if you feel like showing nature why evolution only gave opposable thumbs to winners.

Though there are probably about 30 ways you could scare an electric eel into into discharging itself without being an unthinkable dick to an  other innocent animal, the easiest way people have found to force an electric eel to tucker itself out is to spook a bunch of horses or donkeys into the patch of water it currently lives in. Now we should point out that an electric eel is only usually capable of delivering a shock powerful enough to stun a horse, but we don’t think we need to point out all of the ways a horse could be injured by flailing around in a pool full of tazer-fish while its owner laughs his ass off like a crazy person.

But hey, you can’t argue with results. The sweet, horse murder soaked results.

For more facts involving horses and people being dicks to them, why not read about that one time criminals tried to assassinate a horse and failed.