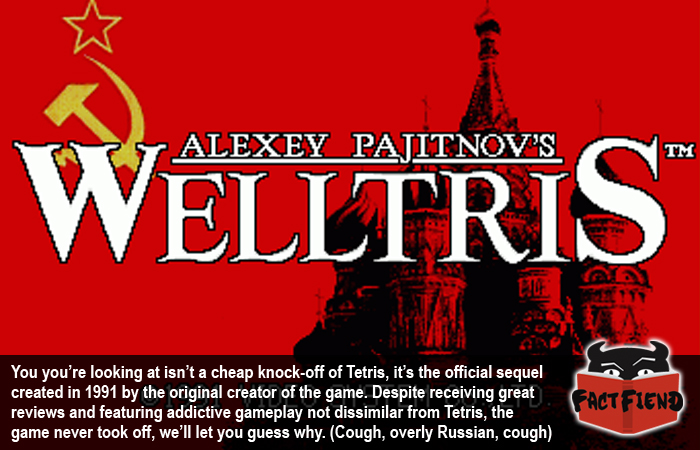 Tetris is like a pair of breasts, even if you haven’t played with the real thing, you’ve no doubt experienced the fake version on the internet when you were alone at home. Tetris is easily one of the most copied video game concepts ever made with hundreds of unofficial rip offs, so today we wanted to talk about the virtually unknown official sequel to the game, Welltris.

Unlike the hundreds of other rip offs out there, Welltris was designed by Alexey Pajitnov, the OG boss-ass pimp behind the first Tetris game. Fun fact, Alexey Pajitnov only started making money from his literally game changing design in 1996, when he formed the Tetris company. Amazingly, Pajitnov has never shown any bitterness about his game being stolen by like, everyone and the millions of dollars in royalties he’s missed out on, only expressing that he’s happy his game has brought happiness to people around the world when asked about it.

The weird part is, Welltris is pretty much exactly the same as Tetris, only in 3D and it was reviewed incredibly well by critics at the time. One of the only criticisms actually levelled against the game was that its soundtrack was kind of lacking, which we’re going to disagree with because it sounds perfectly fine to us, it’s not great, but it’s not that bad either.

Despite this, the game remains incredibly obscure to the point very few people actually know that Tetris even has an official sequel. Well we’re here to tell you that it does and that it was pretty awesome, also it was in 3D which is pretty impressive considering the game was released 23 years ago.