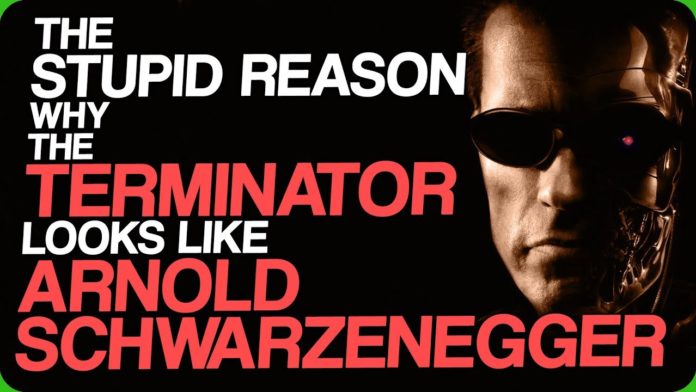 If you’ve ever wondered why Skynet decided that all of its kill-bots had to look like Austrian body builders with accents to match, well it’s explained in a deleted scene in the third movie and the reason is exactly as stupid as you’d expect.

According to the scene, which you can find here, in the early days of the murder robot building business, Cyber Research Systems decided they wanted their eventual bipedal robots to have a face. We’d just like to point out that at this point in the movie it’s clearly established that the most cutting edge Terminator the military currently has is the T-1, which for those of you who haven’t seen the third movie, looks like this.

Cyber Research Systems doesn’t even have robots that can walk yet and they’re already planning the face they want to attach to a T-800. They’re planning 799 moves in advance, holy shit, there are chess playing super-computers who don’t have the ability to plan that far into the future and they’re only concerned with annihilating one person. How the hell did Cyber Research Systems plan to explain the millions of dollars they’d sunk into moulding a perfect human face for the robot they’re hoping to build after they’ve built exactly 799 others to their investors?

Anyway, Cyber Research Systems eventually settle on using the man mountain that is Chief Master Sergeant William Candy (played by,  Schwarzenegger) as the face and body of this purely theoretical robot. Again, they have no actual plans, or even the technology to build a T-800 yet, but for some reason they’ve already picked out the face for it. That’d be like planning the alibi for drunken hit and run 3 years before getting your driving license.

Now you’ll notice that this doesn’t make sense on almost any level, why would Cyber Research Systems invest millions into creating indestructible killer robots if they’re just going to make them look human? Do they think an opposing army is more afraid of 200 identical looking soldiers with Austrian accents or 200 INDESTRUCTIBLE KILLER ROBOTS!

You could argue that they’re proposing this future robot as a means of infiltrating enemy ranks, which makes sense, but is completely negated by the fact that during the scene, someone says they don’t like Candy’s voice even though during the scene Schwarzenegger’s voice is dubbed over with the voice of Samuel L. Jackson! in response a tech head replies in Schwarzenegger’s actual voice with “we can fix it”. Suggesting that after they paid Sergeant Candy millions for exclusive right to have his image and likeness kill thousands of people in future wars, they then paid some dumbass intern for the rights to his voice instead of using SAMUEL L. JACKSON’s voice! Were they exclusively planning on attacking Austria or did they just think the world would instantly freeze due to the coolness if they made more than one robot with that voice?

This scene also raises another fairly valid point, it suggests that it wasn’t Skynet who came up with the idea of making the Terminators look human, but Cyber Research Systems. Which means that prior to the world going to shit, Cyber Research Systems had this random guy with Schwarzenegger’s voice sit down and record every conceivable line of dialogue possible. How else would Skynet upload it into every Terminator they send back to kill Sarah Connor?

Unsurprisingly, this scene has remained cut from every release of the movie to date and according to some, it’s not considered official canon because of that. Which is a nice thought, but then again, how can something involving Arnold Schwarzenegger wearing this hat, not be considered canon?