Scoring a Batman movie is tough because no matter how much effort you put into creating a memorable, unique soundtrack, it’s never going to be as good as the theme from the 60’s era Adam West show. That said, Hans Zimmer sure as shit tried to cram in as many Easter eggs as he could when he scored the Nolan Batman trilogy.

For example, lets start with Batman: Begins, the soundtrack for which features songs with titles like, Myotis, Tadarida and Antrozous which sound like bullshit made-up words, unless you happen to be familiar with mammal biology. In which case you may recognise each track’s title as the scientific names of different kind of bats.

As a more blunt nod to the character, Zimmer specifically arranged the album so that when you read the first letter of each track from tracks 4-9 it spells out the word, BATMAN. We’re guessing he stopped just short of throwing in a few NA NA NA NA’s while he was at it because he ran out of kinds of bat. More subtly, each track on the album is also largely either composed in the keys D or C as a nod to DC Comics who own the rights to Batman and some other character we’re sure have shitty movies being made about them right now.

Moving onto the second movie, The Dark Knight, the soundtrack was scored mostly using traditional methods with the exception of the track Why So Serious. Seeing as this track was supposed to serve as the leitmotif of the Heath Ledger’s Joker, Zimmer had the orchestra play with razor blades and other bladed intruments instead of bows to make their playing sound as weird and fucked up as possible. You know, kind of like this guy…

While officially Zimmer did this so that the instruments produced a “tortured, twisted” sound reminiscent of the Joker’s sense of humor we still think he did it because tit-kickingly awesome to say he conducted an orchestra where people were playing their instruments with knives and razor blades.

Moving on, when the time came to produce the soundtrack for the third film in the trilogy, The Dark Knight Rises, Zimmer similarly went to some rather impressive lengths to produce the right kind of sound. Specifically for the prominent chant heard throughout the film for which he enlisted the help of thousands of volunteers to sing the lyrics “Deshi Basara“.

Zimmer reportedly wanted the chant to sound like it was being sung by thousands of people at once so rather than recording a few people singing the lyrics and layering it a few hundred times, he asked people on Twitter to record themselves screaming the words out loud and send it to him. Zimmer then layered the the thousands of responses on top of one another creating the final effect heard in the film. You may ask why Zimmer didn’t just go with the first, easier option to which we answer, sure he could have done it the easy way but why would he when he could do it The Batman way. 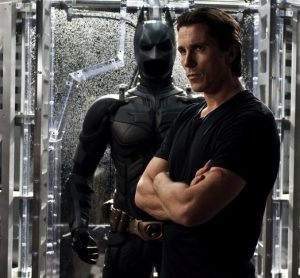 Of course this means that there’s a chance that layered somewhere deep in the song heard in the film is a person screaming the word “PENIS” over and over again who slipped through the cracks. While there’s no proof something like this did happen, we’re going to say that it probably did because it’s funnier to imagine things that way,

Also for anyone curious what in the dick “Deshi Basara” actually means, we have no idea, because Hans Zimmer won’t tell anyone, so to be fair, everyone in that song really could have been screaming about penises. We’ll never know.