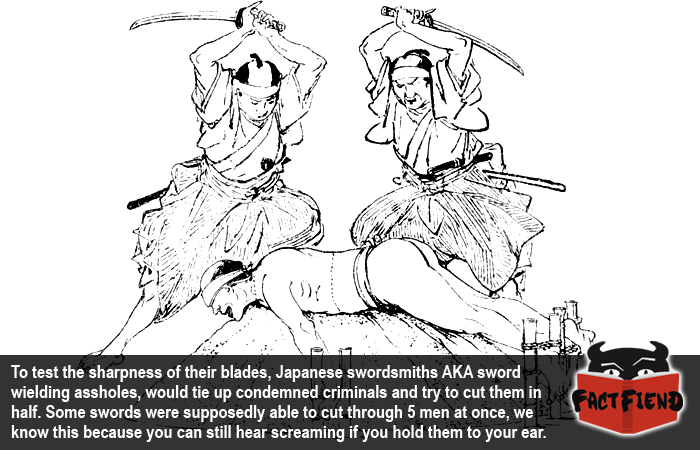 If movies have taught us anything it’s that a katana is arguably the coolest weapon in the world for a singular reason, they can reportedly cut through everything, including the dreams and nightmares of small children. Well in order to attain that legendary level of sharpness, swordsmiths practised on living people.

Known as Tameshigiri (test cutting) the strength, sharpness and capacity for evil of a given blade was tested on either a dead body, or a recently condemned prisoner. Sometimes the prisoner would have been charged with a petty crime, in which case he’d just have to sacrifice his arm to the swordsmith. However, if the crime was severe enough, or the swordsmith had created a really bitchin’ sword, his entire torso was fair game.

Though the legend aren’t clear, what we do know is that some swords were capable of cleaving through a human being like hot knife through testicle warm butter you’d been storing in your pocket. In fact, there are swords in Japanese museums bearing markings that would suggest that when they were smithed they were tested on and found to have been able to cut through 5 whole people. With some, legendary swords rumoured to have been able to cut through even more.

Of course, there is little in the way of written evidence to confirm this, is what historians who refuse the believe the evidence literally carved onto the murder swords say to stop their minds from exploding.

Today swordsmiths test their swords in much more humans ways by cutting straw mats and the occasional slab of beef if Japanese Rocky happens to be nearby. However, even in these cases it’s noted that a straw mat is relatively similar, in terms of how difficult it is to cut through, to an actual human limb.

Please bear that in mind as you scroll through these videos of overweight white guys easily slicing through them with a sword they bought on the internet.