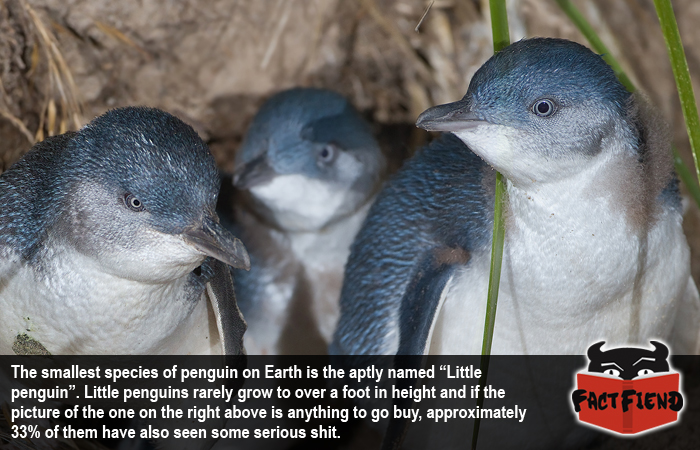 Along with being so adorable they turn ovaries into an endangered species little penguins (how dope is that?) also inspired the the creator of Linux, Linus Torvalds to make penguins into the operating system’s mascot when one of them bit his finger.

At less than a foot tall, little penguins AKA fairy penguins AKA OH-MY-GOD-I- FEEL-LIKE-MY-EYES-ARE-NOW-MADE-OF-HUGS penguins are the smallest known species of penguin on Earth. They’re also a rather fetching shade of blue, since we’re assuming they don’t make a black tuxedo that small.

The penguins, which sadly aren’t sold as pets, or even as a much cooler alternative to owning a car, since you’d never leave your house if you owned one of these, are native to Australia and New Zealand where they spend their time eating tiny cupcakes and wearing tiny hand knit sweaters that locals throw at them out of instinct. However, they also have a mean streak, as Linus Torvalds will attest to.

Now Linus is well known in the computing world as the creator of Linux, an operating system Wikipedia assures is fairly popular, despite us knowing no one who actually uses it. Now the mascot for Linux is a penguin aptly called, Tux, when asked about why he’d chosen a penguin as the logo for his product, Linus had the following story to tell.

While in Australia Linus was bitten by a little penguin that was barely less than 6 inches tall, rather than having his heart explode of cuteness, he caught what he described as “penguinitis” a condition that causes a deep routed love and respect for penguins of all shapes and sizes. When he was later tasked with coming up with a logo for Linux he thought back to that moment and realised that a penguin was the only logical choice.

Though it’s hard to disagree that, that’s a pretty cool story, we can’t help but imagine how much better our lives would be if we had a pet penguin that was only 6 inches tall.