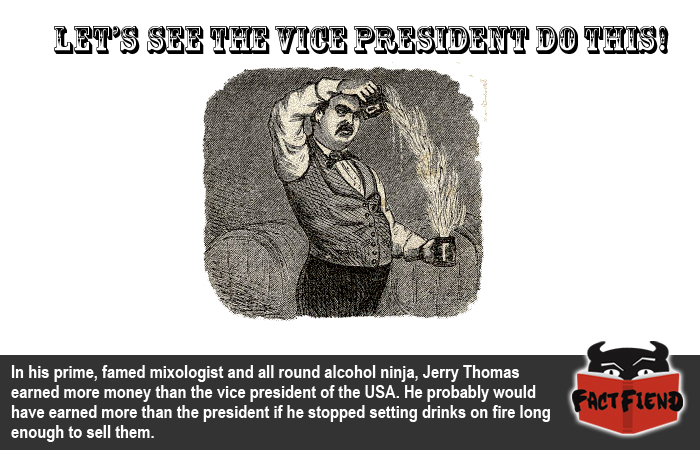 Jerry Thomas is known as the father of modern mixology and also as the owner of a rocking set of face fuzz. His flamboyance, showmanship and love of setting things on fire saw him become one of the hottest (sorry) acts in town.

Thomas’ signature drink, the blue blazer involved literally passing an arc of flame between two glasses, this coupled with Thomas’ penchant for wearing diamond studded rings, cuff links and shirts often resulted in a fancy-ass display of drinks making bravado so fabulous his family is still being sued by Freddy Mercury’s estate to this day.

When you realize that this was a bartender who served his customers drinks born FROM THE CAPTURED FIRES OF HADES THAT HE AND ONLY HE COULD CONTROL, it’s not that much of a stretch to think his skills were kind of in demand. However, it is that much of a stretch to think that Thomas’ skills were so great that he earned more than the second in command of the entire freaking country.

But amazingly, that’s exactly what Thomas did. Sadly, despite earning 100 dollars a week, officially known as “big dick walking around money” in 1863. Thomas made a number of bad investments later in life and spent his last few years desperately trying to recapture his former fame. Wow, that’s kind of a depressing epilogue for a guy who a few decades earlier was milking nectar from a pillar of flame. Sorry about that.

How to Mix Drinks by Jerry Thomas