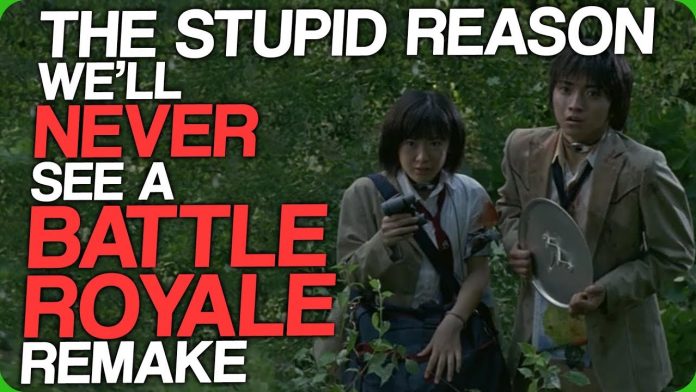 With a solid 86% on Rotten Tomatoes and a cult following so intense it’s required watching when you join Scientology, Battle Royale is arguably one of the best movies in which teenagers try to kill each other, a genre that against all of the odds, is for some reason really popular with teenagers these days. Annoyingly, it seems that we’re never going to see an American remake of this movie because of the existence of The Hunger Games movie.

For those of you lucky enough to have not had the conversation with your hipster friend about this subject, both The Hunger Games book and the film series based on it have been criticised (usually by assholes) almost since they were first published and released due to similarities they share with Battle Royale. Which is kind of fair since both films involve a bunch of teenagers being forced to kill each other until there is only one left. However, there are also a lot of differences in the movies and as smarter people than us have pointed out, the movies have a similar theme, but are very different in tone and anyone who insists that the books or films are identical is someone who has probably seen neither.

What’s more annoying, at least for us, is that Suzanne Collins, the author of The Hunger Games has always maintained that she’d never heard of Battle Royale until she physically turned in her completed manuscript and seems oddly proud of the fact she’s never read the book or watched its film adaptation. Which would kind of be like one of us writing a book about teenage wizards and then insisting that we’d never heard of Harry Potter and came up with the whole idea independent of anyone or anything else because we’re so great when it became popular. It’s a slap in the face for all of the people who came before you and laid the groundwork that enabled your product to succeed. Also, it’s not really that cool to brag about not having seen a movie that is universally agreed to be, as the critics like to put it, “the tits”.

But we’re moving off topic, since The Hunger Games was released it has resulted in an explosion of movies centred around the concept of teenagers killing the fuck out of each other in a bleak, shitty future run by asshole adults. Films like Divergent, The Maze Runner and Enders Game all owe their success to The Hunger Games for building up interest in a genre that was seldom seen up until a few years ago and critics have noted that, for better or worse, we’ll be stuck with movies like this for a while until a turd of such incalculable proportions comes along and bursts the bubble, ruining it for everyone.

With that in mind, you’d think that the American remake of Battle Royale that has been in languishing in development Hell for the last few years would be one of the first movies eager Hollywood studios looking to cash in on all of that sweet teen murder money would go to. But weirdly it isn’t, according to Roy Lee, the guy who has been attached to directing the remake since 2006 has said that the movie will probably never be made now because everyone would just assume they were trying to rip-off The Hunger Games.

Just to clarify, they’re not going to release an American remake of Battle Royale, a movie they’ve been trying to get made since 2006 which itself is based off of a book released in 1999 because studios are worries that audiences would assume it was a rip off of a movie based on a book that wasn’t released until 2008.

We feel bad for making fun of Suzanne Collins now because by the looks of it, nobody else is going to be watching Battle Royale either.